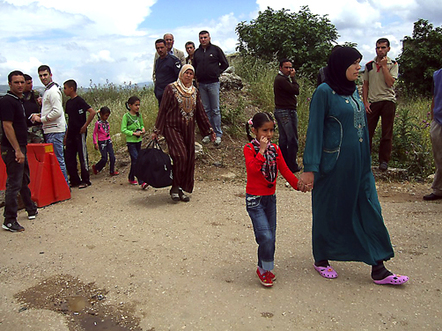 A high-ranking military source has stressed that no Syrian activists have been kidnapped in Lebanon only saying that the General Security Department had arrested Syrian nationals on criminal charges.

“Based on Lebanese Army reports, there are no kidnapped Syrians in Lebanon and the Intelligence Branches in the areas haven’t recorded any case of kidnapping,” the source told An Nahar daily published Friday.

The Army has the names of eight Lebanese and Syrians detainees, some of whom were arrested by the General Security at Rafik Hariri international airport on criminal charges and were referred to the judiciary, the source said.

He also denied that the Army was blockading an area in northern Lebanon where Syrian refugees have resorted to.

Internal Security Forces chief Maj. Gen. Ashraf Rifi has said in a report that four brothers from the Jassem family were kidnapped by the head of the guards unit of the Syrian embassy.

He has also said the disappearance of Syrian opposition member Shebli al-Aisamy had links to the kidnapping of the Jassem brothers.

sure,...... they have not been abducted but rather arrested on criminal charges and "handed" over to the Syrian regime. Why handed over you may ask.... Oh, right, we have bilateral security agreements with the brotherly Syrian regime. Come on guys, have some respect for people's intelligence!

a high ranking source = amid kassem and his hizb officers,is not the whole lebanese army.