Climate Change: 2015 Will be the Hottest Year on Record 'by a Mile', Experts Say 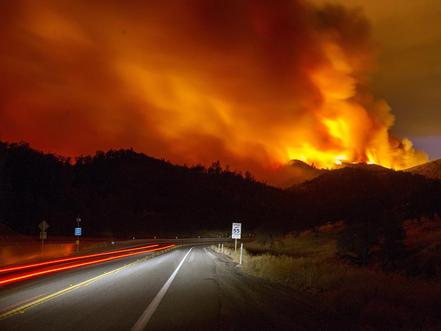 Climate scientists are predicting that 2015 will be the hottest year on record “by a mile”, with the increase in worldwide average temperatures dramatically undermining the idea that global warming has stopped – as some climate-change skeptics claim.

Even though there are still several months left in the year to gather temperature readings from around the world, climate researchers believe nothing short of a Krakatoa-sized volcanic eruption that cuts out sunlight for months on end can now stop last year’s record being beaten.

It is rare for climate experts to make such a bold prediction so soon in the year, but they believe that a surge in ocean temperatures in particular now makes it almost inevitable that 2015 will turn out to be the hottest year globally since instruments were first used to gather readings more than 130 years ago.

The average temperature increase will be so much higher than the previous record, set in 2014, that it should melt away any remaining arguments about the so-called “pause” in global warming, which many climate skeptics have promoted as an argument against action on climate change.

It will mean that the three warmest years since records began in 1880 – 2015, 2014 and 2010 – happened in the past five years, and nine out of the 10 warmest years have all occurred in the 21st century. It demonstrates that global warming is getting worse and underlines the importance of the international meeting in Paris in December to discuss a new legally binding agreement on climate change.

“It’s a sure thing. If you want a number, I would say about 99 per cent [certain],” said Professor James Hansen, a veteran climate researcher at Columbia University in New York and former director of Nasa’s Goddard Institute for Space Studies. “A huge volcano could have an effect, but it had better be Krakatoa-size or bigger and occur within the next month or so if it is to have much effect on 2015’s global temperature,” Professor Hansen told The Independent.

Other scientists agree that the scene is now set for another record hot year that breaks last year’s high by a significant amount – as much as 0.1C higher than the 2014 annual average temperature record of 14.57C. 2015 is currently on track to hit 14.68C.

“It’s going to be so far ahead of the other record year that it’s going to be beyond the error range,” said Phil Jones, director of the Climatic Research Unit at the University of East Anglia in Norwich.

“What’s important is not so much the land but the ocean data. The oceans have really picked up in the last 12 months or so,” Professor Jones said. In addition to the temperature increase attributed to the burning of fossil fuels, scientists are also recording a strengthening of El Niño, the current in the Pacific Ocean that causes sea-surface temperatures to rise.

Normally when global average temperature records are broken, it is by a tiny fraction of a degree – about 0.01C or 0.02C. However, this year the record is likely to be broken by 10 times this margin, said Jessica Blunden, a climate scientist at Noaa.

“I would expect that we could break the record by close to 0.1C. That’s the range we’re in now. It’s higher than we typically see when we break a record, where we see a hundredth or two-hundredths of a degree. So this is quite a large margin,” Dr Blunden said.

Professor Jones said that the 1998 temperature record, which occurred during an exceptionally strong El Niño, was about 0.1C higher than the then previous record year.

“When we looked back over previous records, if something was 0.1C above the previous record it was the warmest year by a mile,” Professor Jones said.

“If this was to carry on for the rest of the year there is no way that this would not be the warmest year, and the reason it’s going to continue is because there is an El Niño event going on and it’s getting stronger all the time,” he said.

“It also means that next year will have a head start as well, if the El Niño event goes on to the start of the new year, because of temperatures lagging the El-Niño effect by about six months. “So you can’t really have a pause [in global warming] with the three warmest years at the end of the record,” he added.

The El Niño “event” is a complex oceanic phenomenon which essentially results in vast swathes of the Pacific Ocean becoming warmer. A natural process that varies in strength, it can exert a significant impact on global average temperatures.

The strongest El Niño in recent times occurred in 1998, which sent global average temperatures soaring. It is still among the top 10 hottest years. Moderate El Niño events occurred in 2002-2003 and 2009-2010. Now another weak-to-moderate event is happening this year. It is expected to run into 2016. However, scientists believe global average temperatures are also rising because of fossil-fuel emissions. El Niño events are just part of the natural fluctuations that can mask or exaggerate human influences on the climate.

“We know very well where the [extra] heat is coming from – increasing greenhouse gases, mainly carbon dioxide. These trap heat radiation, reducing heat radiation escaping to space, so the planet is out of balance, more energy coming in than going out,” said  Professor James Hansen, a scientist at Columbia University in New York.

“The Earth is steadily warming, albeit with ups-and-downs due to natural dynamic fluctuations such as El Niños, and competing natural forces such as volcanoes and solar variability,” Professor Hansen said.

The phenomenon is causing the Pacific to warm up, but other oceans are warming too. The global average sea-surface temperature for January to July was the highest for any similar period since records began 136 years ago, according to the US National Oceanic and Atmospheric Administration.