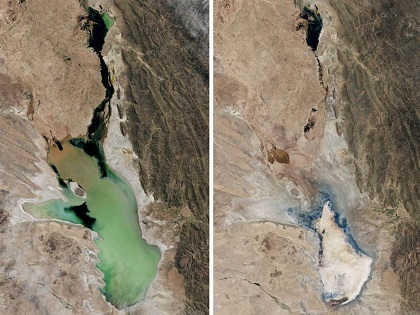 Bolivia’s second largest lake has disappeared, displacing hundreds if not thousands of people who depend on it for their livelihoods.

Lake Poopo was officially declared “evaporated” last month in what scientists have said serves as a warning about climate change.

The lake - which is situated more than 12,000 feet above sea level on the country’s Andean plains - has all but dried up before due to El Nino, but had rebounded to twice the size of Los Angeles.

But scientists say this time recovery may no longer be possible.

Dirk Hoffman, a German glaciologist studying how rising temperatures from the burning of fossil fuels has accelerated glacial melting in the country said the extinct lake “is a picture of the future of climate change”.

Local environmental activists have blamed the government for the evaporation of the shallow saline lake, saying it mismanaged water resources and ignored the pollution spread by tin mining upstream.

They accused the largest state-owned tin mine, Huanuni, of dumping untreated waste in Lake Poopo’s tributaries.

The head of a local citizens' group that tried to save Poopo, Angel Flores, said: "Something could have been done to prevent the disaster. Mining companies have been diverting water since 1982".

While Lake Poopo has suffered El Nino-fueled droughts for millennia, its fragile ecosystem has experienced unprecedented stress in the past three decades.

Temperatures have risen by about 1C while mining activity has restricted the flow of tributaries, increasing sediment.

More than 100 families have been forced to leave the small lakeside village of Untavi over the past three years as the drought accelerated - halving the population.

Former resident Juvenal Gutierrez said there was “no future” in the town.

According to the local government’s office, at least 3,250 people have received humanitarian aid.

It estimates that Lake Poopo is now down to two per cent of its former water level and 75 species of bird have already disappeared from the area.