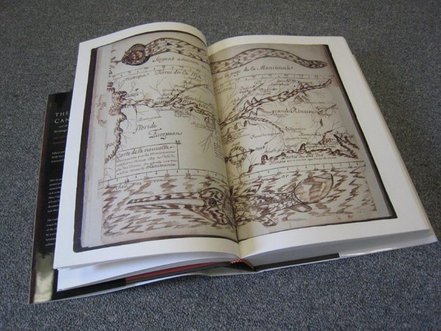 An illustrated book describing Canada's vast wilds, masked medicine men and a missionary's taming of bears at the onset of European colonization will hit bookstores on Saturday -- three centuries after it was written.

The manuscript titled "The Natural History of the New World" and a separate codex of drawings was penned around 1675 by a fantastically imaginative Jesuit priest named Louis Nicolas.

The tomes languished separately -- one in France's national library in Paris, the other in the Gilcrease Museum in Tulsa, Oklahoma.

Eventually, a Quebec art historian determined during some 30 years of research that both volumes were written by the same author and after identifying him, brought the two works together in one 550-page volume.

The work is being published for the first time by McGill Queen's University Press as "The Codex Canadensis and The Writings of Louis Nicolas."

"This is really the first natural history of Canada volume, and it was penned long before Darwin's voyage of the Beagle or the Lewis and Clark expedition," said Francois-Marc Gagnon, an art historian at Concordia University in Montreal.

Gagnon told AFP the author had fought the Vatican to get his writings published. Thwarted by Rome in those attempts, he eventually quit the church and disappeared.

Nicolas was born in France in 1634 and spent 15 years as a missionary in Canada and parts of the United States (known then as New France), but was criticized by his peers for converting relatively few aboriginals to the Catholic faith.

Instead, he spent most of his time roaming the outback and documenting plants and animals and aboriginals, creating a portrait of 17th century North America that is part art, part science, and part anthropology.

"He wasn't a regular Jesuit," commented Gagnon. "He was an extremely curious man and very interested in nature, and he traveled a lot."

Nicolas's writings describe how he tamed black bears at a monastery in Quebec, which upset his fellow clergy because the animals scared away visitors.

He drew images of mice and moose, sprouts and tall trees, aboriginal long houses, grand chiefs and "masked medicine men, which were never represented (with masks) at the time."

He also corrected several erroneous notions of the period, for example, that beavers worked in teams to build large dams and used language to facilitate coordinating tasks (they actually work alone or in pairs).

And in terms of art history, Nicolas's whimsical renditions stand out in a period when the only subject matter was religion.

"There are no landscape paintings from that period, for example. But suddenly there was this guy who had an eye for scientific discovery, and a sense of humor," Gagnon said.

"A lot of it is bizarre and funny, from a literary perspective."

What is really remarkable is the vast amount of information that he gathered on the natural world, far more than his contemporaries. He recorded more than 300 plants, for example.

"Unfortunately the Jesuits found some of his remarks improper -- not religious enough," said Gagnon.

The professor enlisted dozens of translators, linguists, botanists, biologists, entomologists, historians and others to help unravel the life's work of the "mysterious author" who was known only by his initials on the manuscript.

After finding the same animals and plants described in the manuscript also illustrated in the codex, the researchers determined that the same person was responsible for both.

Deciphering the writings and pairing them with the illustrations was at times painstaking as Nicolas used aboriginal names for species native to North America, and wrote in archaic French, the researchers said.

Nicolas apparently intended to pen six additional chapters on aboriginals, but "either he didn't do it or it's lost because we don't have it," Gagnon lamented.

Many of these aboriginals, however, do appear in his sketches.