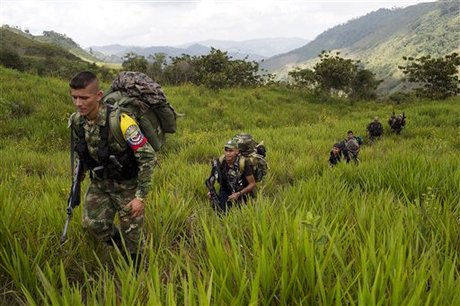 Latin American leaders gathered Wednesday for a summit focused on Colombia's request for personnel for a U.N. mission to oversee what the region hopes is an imminent peace deal with the FARC rebels.

The request from the Colombian government and the leftist guerrilla group for unarmed observers to monitor the eventual end of their half-century conflict tops the agenda as leaders from the 33-member Community of Latin American and Caribbean States (CELAC) meet in the Ecuadoran capital Quito.

The U.N. Security Council agreed Monday to send a "political mission" to Colombia once a peace deal is signed. This was seen as a strong signal that the end of Latin America's longest-running conflict is near.

The two sides, which have been holding peace talks for the past three years, asked CELAC countries to staff the mission. Jeffrey Feltman, the U.N.'s undersecretary general for political affairs, will be in Quito to discuss the regional group's role.

The summit, attended by some 20 presidents, will also discuss the fight against poverty in the region, whose economies are stuck in a painful slowdown brought on by the collapse in prices of oil, agricultural goods and other commodity exports.

Some 27 percent of the region's 620 million people live in poverty. The number of poor, which fell dramatically at the turn of the millennium as the region's economies boomed, now risks creeping up again, economists warn.

The most notable absence from the summit will be Argentina's new President Mauricio Macri, who pulled out saying he had cracked a rib while playing with his daughter.

Sparks had been expected to fly between Macri, a business-friendly conservative, and Venezuela's leftist President Nicolas Maduro.

Maduro's government has accused the Argentine leader of meddling by calling for the release of what he called opposition "political prisoners," a phrase Maduro rejects.

Maduro had vowed to fight fire with fire at the summit, saying "I'm not going to take anybody's abuse" and "I'm bringing it all to (this) summit -- nobody's going to shut me up."

Venezuela was one of the main forces behind the 2011 launch of the regional group, which comprises all countries in the Americas except the United States and Canada.