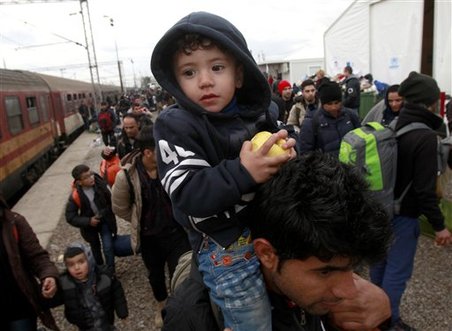 Austria's foreign minister called on the European Union on Thursday to stop giving aid to countries that refuse to take back nationals whose asylum claims were rejected.

"We in Europe need to finally start stepping up pressure if we want the repatriation system to work properly," Sebastian Kurz told national broadcaster Oe1.

The conservative politician specifically mentioned Morocco, Tunisia and Pakistan, which he said were allocated a large chunk of the bloc's annual 11-billion-euro ($12-billion) aid budget.

"At the moment, the EU gives 480 million euros to Morocco and 414 million to Tunisia every year, and yet these countries refuse to take back asylum seekers," Kurz said.

Germany's vice-chancellor Sigmar Gabriel last month said EU aid should be withdrawn if a migrant's country of origin fails to cooperate on repatriation.

Kurz said he wants the proposal to be discussed at the next EU summit on February 18 and 19.

The bloc is grappling with its worst migrant crisis since World War II, and the flow of people fleeing war and poverty shows no sign of abating despite wintry weather conditions along the so-called Balkan migrant route.

In 2015, over a million people reached Europe's shores -- nearly half of them Syrians fleeing a brutal civil war that has killed more than a quarter of a million people.

Austria, a country of nearly nine million people, last year received 90,000 asylum claims, one of the highest rates per capita in the EU.

In response to the influx, Vienna announced last month it would drastically cap the number of asylum seekers and deport at least 12,500 people in 2016.

Austria's new Defense Minister Hans Peter Doskozil on Thursday slammed the EU border agency for lacking in action and being "way too bureaucratic".

"We need to discuss how to put into a place a European civilian and military mission" to protect the bloc's external frontiers in Greece, Doskozil told Austrian newspaper Kurier on Thursday.