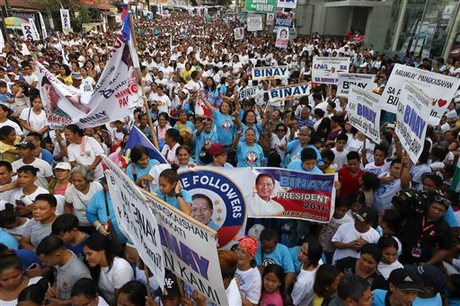 A cliffhanger race to lead the Philippines began Tuesday with emotion-charged rallies by a dead movie star's adopted daughter, a politician who brags about killing criminals and other top contenders.

The three-month election campaign got under way with four aspirants standing a genuine chance of succeeding popular President Benigno Aquino, who is limited by the constitution to a single term.

The Philippines has endured a turbulent democracy since emerging from the Ferdinand Marcos dictatorship three decades ago -- with coups, corruption, celebrities and violence dominating politics.

The run-up to the May 9 polls for president, as well as for thousands of other posts, promises more chaos and intrigue.

The current presidential front-runner is Grace Poe, an inexperienced politician riding a wave of popularity among the tens of millions of poor for her adopted father, Fernando Poe Jnr.

He became one of the nation's most loved actors by playing characters who championed the poor, then nearly translated that into political success by coming second in the 2004 presidential elections.

Addressing supporters on Tuesday night at a Manila church venue that was a favorite setting for her father's films, Poe promised to fight for the millions of poor Filipinos who have largely not felt the benefits of strong economic growth under Aquino.

"I stand before you today as a Filipino, a woman who knows how to fight bullies and oppressors, a leader with a heart that loves our country and people," Poe said, while repeatedly referring to her father.

Poe, 47, began the presidential campaign as the front runner with about 30 percent support, according to two national surveys released in recent days.

But opponents have petitioned the Supreme Court to disqualify Poe, arguing she cannot prove she is a "natural-born Filipino" because she does not know who her biological parents are.

The Supreme Court could also disqualify Poe for failing to meet residency rules, because she spent many years living in the United States and gained U.S. citizenship before renouncing it and returning home.

If Poe is knocked out, with a court ruling expected during the campaign, the nation would be plunged into political turmoil with three contenders who are currently each polling about 20 percent support ready to pounce.

Aquino, who has overseen growth averaging 6.2 percent since 2010 and won international applause for trying to fight corruption, wants to hand over to longtime ally Mar Roxas.

However Roxas, 58, a U.S.-educated investment banker from one of the nation's richest families, has consistently trailed in the polls.

Analysts blame a lack of charisma and Roxas sought in his rally Tuesday to remedy his perceived inability to connect with the poor.

"We will make sure that every family is free from hunger, free from fear and free to dream," Roxas, who served as interior and transport ministers in the Aquino government, told supporters in his home province of Capiz.

Controversial populist politician Rodrigo Duterte, 70, who is making a spectacular charge for the presidency by vowing a ruthless crackdown on crime, headed to Manila's most famous slum to launch his campaign.

Human rights groups have accused Duterte of running vigilante "death squads" that killed more than 1,000 suspected criminals during his many years as mayor of the southern city of Davao.

In various public events, Duterte has acknowledged the existence of the death squads, boasted specifically of killing alleged drug traffickers and offered more of the same for the rest of the country.

"There will be killings. There will be a lot of blood," Duterte said this week as he pledged to wipe the streets clean of criminals if he was president.

The final major contender is Jejomar Binay, who heads the main opposition party and is the current vice president -- the nation's two top posts are elected separately.

Binay, 73, has spent decades building a vast political machine but has had to endure a barrage of corruption allegations that have seen him lose his front-runner status.

He denies all the allegations but some analysts expect the ombudsman to charge Binay with corruption during the campaign.