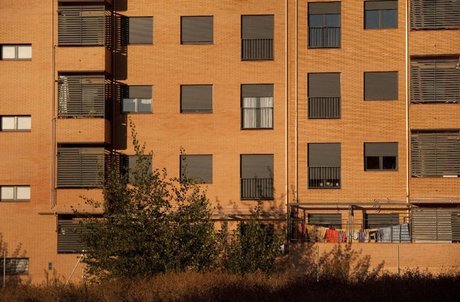 Record unemployment, stalled growth and debt-struck households and businesses: Spain has a long road to travel before it can put the 2008 property bubble collapse behind it.

It was the 10th straight year in which Spanish economic growth had outstripped the European average.

Seven years later, it's unemployment that has doubled to 21.52 percent while the economy is expected to grow just 0.8 percent in 2011, far below the government target of 1.3 percent and half of the expected Eurozone rate of 1.5 percent.

"Spain is probably one of the countries that has undergone the most change in such a short period," said Carlos Sebastian, professor at Madrid's Complutense University.

"Between 2007 and 2009, we went from a budget surplus of two percent of gross domestic product to a deficit of 11 percent!" Sebastian said.

"There was an excessively positive and optimistic vision of Spain. I have always been pessimistic about the poor quality of Spanish growth because it was based on the creation of bad jobs," he said.

Powered by a construction boom, from 2000 onwards the country built about 700,000 homes a year, as many as France, Germany and Britain combined, until the financial crisis erupted in 2008.

When the bubble burst, the damage was widespread.

In the short term, waves of developers fell into bankruptcy and construction workers were thrown out of work.

In the longer term, Spain lost a precious source of revenue.

In this highly decentralized country, regions and municipalities that had profited in the boom times, building pools, motorways and even airports, were unable to stop spending fast enough.

By the end of June this year, the 17 powerful regions had accumulated a record 133.2 billion euros ($182 billion) in debt, and municipalities an unprecedented 37.6 billion euros ($51 billion).

The banking sector, which lent money hand over fist to developers and retail customers alike, now has 176 billion euros ($241 billion) in problem loans and seized property and land.

Borrowers have racked up huge debts: in 2010 Spanish households had gross debt equal to 90 percent of annual GDP and businesses 205 percent, according to the International Monetary Fund.

By contrast, the public debt amounts to 65.2 percent of GDP.

"Spain's problem is not the public debt, which is sustainable in the short and medium term, it is the private debt of real estate companies, builders and families," said Inversis bank analyst Fernando Hernandez.

"It is a problem that will take years to resolve."

Unable to rely on bricks and mortar, the country no longer knows where to find its growth.

Economists predict that Spain will fall back into recession in 2012, barely two years after emerging from the last one.

This year, they say, Spain will likely fail to meet its target of cutting the annual public deficit to 6.0 percent of GDP.

"We all think it will be between seven and eight percent," said Juan Jose Toribio, economist at the IESE Business School in Madrid.

The conservative Popular Party, expected to win general elections Sunday by a landslide, has said it will follow a strict austerity program, banning regions from running up deficits.

"In the first 100 days, the new government is going to have to pass reforms," said Toribio.

A new administration would need to make changes in the labor market and the financial system so as to calm nervous markets, and drive through a program to cut public spending and trim the deficit, the economist said.

"The worst thing the government could do would be to do nothing," Toribio warned.