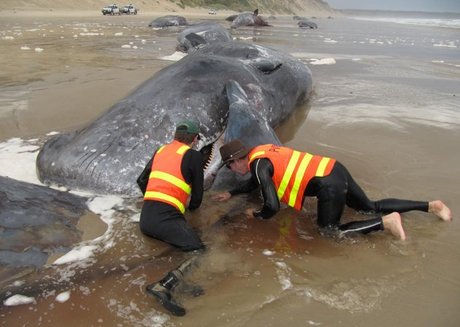 Rescuers were racing against the clock Monday to save two huge sperm whales stranded on a Tasmanian sandbank after 22 others died, the Parks and Wildlife Service said.

Marine mammal specialists were on site in Macquarie Harbor at Strahan on Tasmania's northwest coast, but the rescue bid was hampered by rough weather.

Twenty-two of the whales -- each weighing two tons and up to 12 meters (40 feet) long -- washed ashore on Saturday at Ocean Beach near Strahan, and all of them died.

Four others came into the harbor and became stranded on a sandbank. Two of these were successfully refloated and swam back out to sea, but the other two remain stuck.

Rescuers said two minke whales also got into trouble nearby and died.

Tasmanian Parks and Wildlife incident controller Chris Arthur said the sperm whales were so big that they could not simply be pulled into deeper water by volunteers, instead requiring a more complicated rescue operation.

"A specially-developed net attached to two boats has been designed to slip under a whale, enabling it to be hauled from immediate danger," he said.

"This method can be used for large animals and is very effective."

But conditions were worsening, with high winds and seas, and attempts to refloat the whales had to be postponed until Tuesday.

"Although we were unable to move the surviving whales into open water today, we are hoping conditions will improve over the next few days," Arthur said, adding that the whales were tired but still flapping their fins and blowing water.

"The weather conditions are against us at present, but managed properly, these animals can survive at least a few days."

Another problem in Strahan is its treacherous narrow channel, known as Hells Gates, through which the whales must pass to get back into deeper water.

"Pushing a large whale against sea surging through the 25-metre passage is like pushing a cork into a bottle," added Arthur.

But he expressed confidence given that seven sperm whales were saved after a similar stranding in the harbor in 2007.

The Parks and Wildlife Service said that samples had been taken from the 22 dead whales, which will remain on the beach until they decompose because they are too large to move or bury.

Explaining why they died, Arthur said: "People seem to forget that these animals breathe air. When they are caught in the surf and they are being rolled around, they are in the sand -- they can't get their blowholes up to get oxygen."

Whale beaching is relatively common in Australia and it usually occurs in the summer months, particularly around Tasmania, but scientists do not know why it happens.