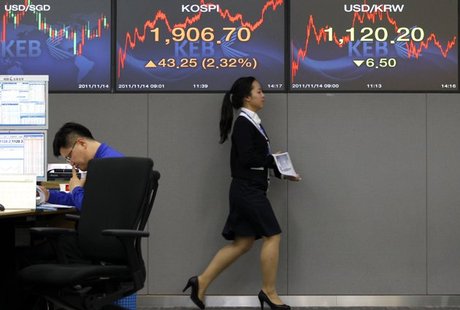 World stocks rose Monday after Japan's economy grew for the first time in four quarters and Europe moved closer to resolving a debt crisis that threatens to hurl the region into recession.

Benchmark oil hovered near $99 per barrel while the dollar gained against the euro but fell against the yen.

On mainland China, the benchmark Shanghai Composite Index gained 1.9 percent to 2,528.71 while the smaller Shenzhen Composite Index jumped 2.5 percent to 1,083.04. Benchmarks in Singapore, Australia, and Indonesia were also higher.

Hopeful signs emerged over the weekend from Europe after Silvio Berlusconi reluctantly bowed to market pressure and resigned as Italy's premier. His successor, economist Mario Monti, faces the monumental task of enacting profound reforms aimed at preventing Italy from defaulting on its huge debts.

Unlike Greece, Portugal and Ireland — which have received emergency financial help from international lenders — Italy is considered much too big to bail out. Its next government must push through austerity measures to deal with euro1.9 trillion ($2.6 trillion) in debt.

"There is a silver lining from the past two weeks of political uncertainties in Greece and Italy," analysts at DBS Bank Ltd. in Singapore said in a report. "Both countries now have leaders who are not only closer to the European Union, but are also moving towards forming technocratic governments better suited to implement much needed reforms."

Investment confidence was also boosted after Japan released data showing its economy — sent into recession by a record earthquake — had surged in the latest quarter. The economy jumped 6 percent, the first expansion for the world's No. 3 economy in four quarters.

The surge comes as Japan claws its way out of a crisis stemming from an earthquake and tsunami that decimated factories across the country's northeast on March 11.

Since then, the country has steadily restored its factories, helping the economy rebound despite the threats of a financial crisis in Europe, slowing global economy and a strong yen.

In Greece, there was good news Friday, as former central banker Lucas Papademos was sworn in as interim prime minister following a political crisis that jeopardized the country's ability to continue receiving emergency loans.

Papademos must now get his government to agree to a debt deal that will net the country billions of euros in acutely needed rescue money — provided that it enacts painful austerity measures including tax hikes and sharp cuts in public spending.

Without the rescue money, Greece's faces insolvency and a massive default on its debts — an event that experts believe could set off a banking crisis and eventually blow up into an all-out European recession.

But some analysts suggested Europe's crisis was already beyond repair and that no realistic amount of budget-cutting or aid could revive Greece's comatose economy or relieve Italy of the mountain of IOUs that it is sitting on.

"I am not very optimistic. All those who think the euro has stabilized or that Europe has stability, I think they are wrong," said Tom Kaan of Louis Capital Markets in Hong Kong. "The risk is still very much out there."

State-owned Xinhua news Agency quoted a Ministry of Railways official as saying that the trains have been repaired and would start entering service on Wednesday.

Despite its 2.5 percent growth rate last quarter, the U.S. economy remains fragile. The Federal Reserve recently lowered its economic outlook for 2012. The central bank predicted that the economy will grow at a rate of about 2.7 percent next year. That is a full percentage point below a forecast from June, and below the 3 to 5 percent annual growth rate that is considered healthy.

On Wall Street, stocks surged Friday after Italy and Greece moved closer to getting their financial crises under control.

Benchmark crude for December delivery was down 10 cents at $98.89 a barrel in electronic trading on the New York Mercantile Exchange. The contract rose $1.21 to settle at $98.99 in New York on Friday.