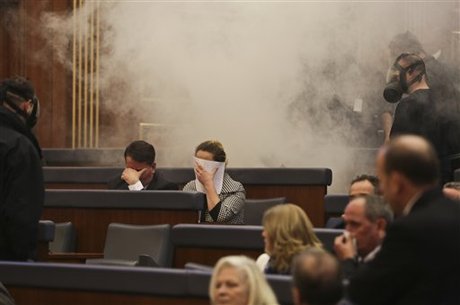 Scenes of violence at Kosovo's parliament during which opposition MPs released tear gas to prevent the election of a new president were "extremely worrying", the European Union said on Saturday.

The protests took place on Friday as the parliament gathered to elect a new head of state in an election marred by violence both inside the chamber and on the streets of Pristina.

Kosovo's opposition MPs are furious over a government deal with Serbia to create an association giving greater powers to Kosovo's Serb minority -- a move they fear will increase the influence of Belgrade.

"The scenes we have witnessed yesterday in the assembly on such an occasion are extremely worrying," said a statement from the office of the EU's foreign policy chief Federica Mogherini, noting the "tense and divisive atmosphere" inside the legislature.

"Acts of violence in any form and by anyone are unacceptable. Inflammatory rhetoric only deepens the divide and makes a dialogue more difficult. We expect political leaders of Kosovo to act responsibly and to collectively calm down the tensions."

Thaci, who served as premier between 2008 and 2014, won support from 71 deputies in the 120-seat parliament in the third and final round of voting, which took place after opposition MPs released tear gas in the legislature in an attempt to scupper his election.

Some opposition members were forcibly removed and banned from the vote and others refused to take part, while about 1,000 of their supporters protested on the streets outside against Thaci becoming head of state.

Police fired tear gas at rioters who lobbed Molotov cocktails during the protest, which was fueled by anger at Thaci and his colleagues for alleged corruption, around 40 percent unemployment and a disputed government deal with Serbia.

The former political leader of the pro-independence Kosovo Liberation Army, which fought Serbia in the late 1990s, Thaci has been accused of involvement in organized crime and organ trafficking during and after the war -- charges he strongly denies.

Kosovo, whose 1.8 million people are mostly Muslim and ethnic Albanian, declared independence from Serbia eight years ago but Belgrade refuses to recognize its sovereignty.

Thaci is due to be sworn in on April 7.