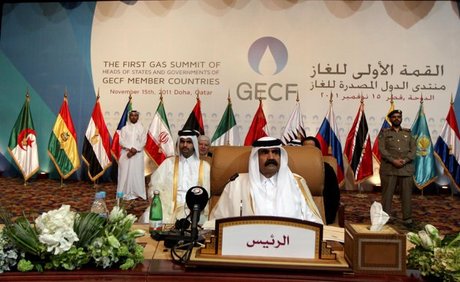 Leaders of the world's biggest gas suppliers ended their first summit on Tuesday by reiterating the need for a fair gas price while Iran, whose president was absent, warned that Western taxation will derail the energy market.

The 12-member Gas Exporting Countries Forum (GECF) expressed in a declaration they issued after the one-day summit "the need to reach a fair price for natural gas based on gas to oil ... prices indexation."

The declaration said the fair price is necessary to achieve convergence between prices of crude oil and natural gas and end disparities.

The declaration said GECF members "recognize the importance of long-term gas contracts to achieve a balanced risk sharing mechanism between producers and consumers."

GECF, whose members hold just under 70 percent of the world's natural gas reserves, also called for enhancing cooperation between member states and with consumers, especially in the field of technology.

Emir of Qatar Sheikh Hamad bin Khalifa al-Thani opened the summit by complaining about disparities between oil and gas prices despite the rise in gas consumption in recent years.

"It is illogical that discrepancies between oil prices and gas prices increase in favor of the first," said Sheikh Hamad, who added that he does not call for controlling production to influence prices.

Egyptian Petroleum Minister Abdullah Ghorab, who represented his country, said a fair price "is the cornerstone for developing the gas industry."

Algerian President Abdelaziz Bouteflika and the leader of Libya's National Transitional Council, Mustafa Abdel Jalil, were among those attending the one-day summit.

Iranian President Mahmoud Ahmadinejad, who had been expected to represent the Islamic republic "wanted to be here but could not come," his representative, Iranian Oil Minister Rostam Qasemi, told the summit.

Qasemi termed the meeting "a turning point in the history of the natural gas industry," but blasted taxes against energy exports by Western consumers.

Any taxation by consumer countries "will derail the energy market," warned Qasemi who also said the falling dollar has "negatively affected the world economy."

Kazakhstan, Norway and the Netherlands are observers.

Russia is the world's largest gas producer and sits on 30 percent of global reserves, while Qatar is the largest liquefied natural gas (LNG) exporter with a production capacity of 77 million tons a year.

GECF has been working for a fair gas price which its leaders say is the fastest growing energy source, but they deny it aims to control prices or become a cartel like the Organization of Petroleum Exporting Countries (OPEC).

Gas prices are currently determined either in long-term contracts between sellers and buyers, which some exporters index to oil, or on spot markets.

World gas demand dipped in the wake of the global financial crisis but the GECF says it rebounded last year, rising 7.3 percent, mainly due to Japan boosting LNG imports after its March tsunami and nuclear crisis.

The International Energy Agency estimated last month that around $10 trillion of investments would be needed in the gas industry until 2035, or about $400 billion a year.