Greek Economy in Dire Shape Ahead of Confidence Vote 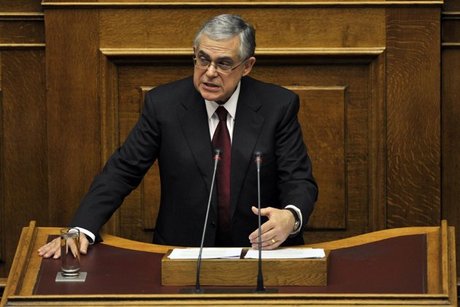 The Greek economy shrank 5.2 percent in the third quarter, official figures showed on Tuesday, highlighting the depths of the crisis as parliament debates approval of a new government to enact a debt rescue.

Athens is racing against time to adopt deeply unpopular reforms demanded by its European and IMF creditors before the release of bailout loans needed to avert bankruptcy in mid-December.

Hoping to delay a default, the Greek debt management agency on Tuesday raised 1.3 billion Euros ($1.78 billion) in a sale of three-month treasury bills.

The interest offered to investors rose to 4.63 percent from 4.61 percent in an equivalent sale in October, amid great Eurozone bond market tension, but the greater blow to the economy came from the latest data on Greece's recession.

The statistics agency said that in addition to the third-quarter contraction that was just short of an annual estimate of 5.5 percent, the recession was deeper in the first and second quarters than originally estimated.

In its darkest hour, Greece has turned to former European Central Bank deputy chief Lucas Papademos to save itself from ruin and a humiliating Eurozone exit.

In his maiden speech to parliament on Monday at the start of a three-day confirmation procedure, Papademos said that reforms necessary to keep Greece in the euro would be achieved only through national unity.

"We can address the crisis faster and at a lower cost through national understanding and social cohesion," the 64-year-old onetime central banker said.

"Every centimeter of national responsibility is equal to a meter of social and economic progress," he told the chamber.

Greece needs to unblock a loan installment of eight billion Euros from an earlier EU-IMF rescue deal blocked since August, and ratify a follow-up Eurozone package set up in October that offers to slash its huge debt by nearly a third.

The European Union, before releasing the delayed loan installment, expects written pledges from the new government and its political allies that deficit reduction targets and a structural shake-up to improve competitiveness will be carried out.

So far, one of the coalition partners, conservative leader Antonis Samaras, has strenuously objected to the EU's request.

The incoming administration was welcomed by the public in opinion polls but unions and left-wing parties who boycotted the power-sharing talks are mobilizing to stop the ongoing austerity drive.

Civil servants are staging a three-hour work stoppage on Tuesday and teachers will hold a two-hour walkout to protest against planned wage cuts coming on top of salary and pension reductions imposed last year.

"Our incomes have already been reduced by 50 percent," the head of the civil servants union Adedy, Costas Tsikrikas, told Flash Radio.

Tsikrikas also warned that a parallel initiative to force 30,000 civil servants into early retirement was unconstitutional and would rob departments of expertise.

"The most experienced and able staffers are being forced out," he said.

The transition government headed by Papademos, formed last week with the backing of the socialist, conservative and right-wing nationalist parties, must also hold early elections in a few months.

The confirmation procedure is scheduled to conclude on Wednesday with a confidence vote which the government is expected to win handily.

The three parties in the coalition can muster over 250 votes among them in the 300-seat chamber.

Representatives from the EU, European Central Bank and IMF are to visit Athens on Friday to assess whether conditions are ripe for the disbursement of the eight-billion-euro loan tranche.