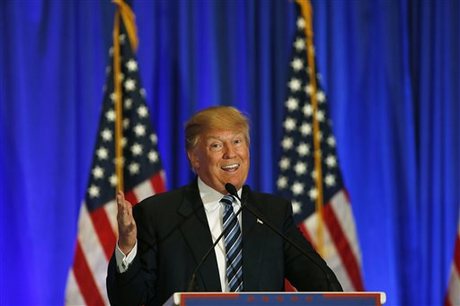 Donald Trump kept a firm grip on his lead in the Republican race for the White House on Sunday but Senator Ted Cruz emerged as his strongest challenger in weekend primaries with mixed outcomes.

Hillary Clinton meanwhile extended her frontrunner status in the Democratic contests but Senator Bernie Sanders showed he is still in the race with a pair of victories.

Clinton and Sanders compete Sunday in Maine's nominating contest and face off in a televised debate in Flint, Michigan just two days before a crucial primary in that delegate-rich northern industrial state.

But eyes were on the Republican contests after a stormy week in which panicked party leaders trained their biggest guns on Trump, the billionaire who has galvanized disaffected voters with an anti-immigrant, anti-free trade campaign filled with insults, attacks on minorities and mockery of the political establishment.

After the voting was over on Saturday night, only Cruz, the ultra-conservative Texas senator, had scored victories against Trump -- in Kansas and Maine. Trump won in Louisiana and Kentucky, but Cruz picked up more delegates overall.

Senator Marco Rubio of Florida scored no victories and picked up only a few delegates, unable to capitalize on the establishment assault on Trump, who called on Rubio to step aside.

"I would love to be able to take on Ted one on one," Trump said in Florida, minutes after winning in Kentucky. "That will be easy."

Trump, who had traded slashing, personal attacks with Rubio in the run-up to the vote, dismissed the Florida senator as the "loser of the night" in an interview with Fox News.

Cruz also urged Rubio and Ohio Governor John Kasich to drop out, arguing that the anti-Trump vote will be split as long as they remain in the race.

"The field needs to continue to narrow," Cruz said.

But both Rubio and Kasich were expected to stay in at least until the primaries in their winner-take-all home states.

To win the Republican nomination outright, a candidate must win 1,237 delegates.

Failure to hit that number would result in a Republican nominating convention in July that could require multiple rounds of voting by delegates, something not seen in decades but which could conceivably throw the race to someone other than Trump.

Mitt Romney, the former Republican presidential nominee who denounced Trump as a "phony" and a "fraud" this week, said he expected to endorse one of the three other candidates before the party convention.

Asked whether he would reject the nomination if drafted, Romney said such a scenario would be "absurd" but left the door open to it, in an interview with CBS' Face the Nation.

The next big day on the electoral calendar is Tuesday when Michigan and Mississippi have Democratic and Republican primaries.

Republican-only nominating contests also are being held that day in Idaho and Hawaii. Puerto Rico also holds a Republican primary on Sunday.

After Saturday's contests, Clinton had 1,121 delegates, nearly half the 2,383 needed to win the Democratic nomination.

The former secretary of state won in Louisiana, the biggest prize of the night, but Sanders won in Kansas and Nebraska, pushing his total to seven victories in 18 contests.

Clinton was favored in Louisiana thanks to overwhelming support from African-American voters, while Sanders has tended to do best in states with largely white voters.

"What we are seeing in many cases is not just a racial divide but a generational divide. We are doing better and better with younger people whether they're black, Latino or white," Sanders said on CNN's State of the Union show.

"If the turnout is high in Maine today, I think we have a good chance of winning there as well. So I think we're showing strength all across this country," he said.