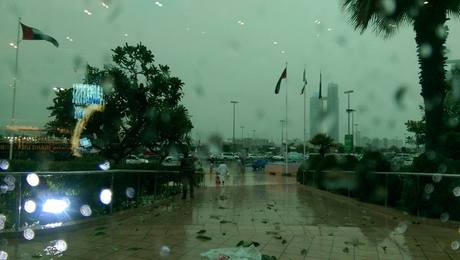 Schools were ordered shut, flights suspended and the stock market was closed down in the United Arab Emirates as rare heavy rain hit the desert Gulf state on Wednesday.

Abu Dhabi's stock market said it suspended trading and canceled all morning deals after many traders could not reach the bourse.

Others showed shades and construction barriers that had collapsed on cars.

The weather agency in the UAE, which ranks among the world's 10 driest countries, said more rain is expected on Thursday.

The country's annual rainfall stands at 78 millimeters (three inches), more than 15 times less than the amount for an average year in Britain.

But the National Center for Meteorology and Seismology said some 240 millimeters of rainfall was recorded Wednesday near Al-Ain.

"Not #london or #dublin, this is Dubai today after heavy rain!" wrote Andrea Colonnelli on Twitter posting a video of cars wading through a flooded street.

Another video posted on the micro-blogging site showed a man kayaking through a flooded residential area.

"2 days of rain in #Dubai, my neighbour is kayaking," read one comment.