Analysis: N. Korea Nuke Threat not all Bluff and Bluster 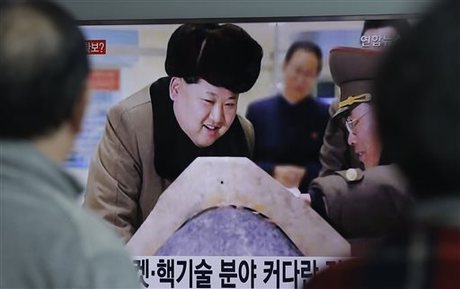 Skeptics of North Korea's nuclear threat, and there are many, have long clung to two comforting thoughts.

While the North has the bomb, it doesn't have a warhead small enough to put on a long-range rocket. And it certainly doesn't have a re-entry vehicle to keep that warhead from burning up in the atmosphere before it could reach a target like, as it has suggested before, Manhattan.

North Korea on Tuesday suggested it will soon show the world it has mastered both technologies.

That would require a huge jump in the North's suspected nuclear capabilities, so it may be just the latest case of Pyongyang saying with vitriolic propaganda something it cannot demonstrate in tests. But if it delivers, it will put to rest one other comforting thought: that it's safe for policymakers in Washington and elsewhere to take North Korea's claims as mainly just bluster.

"We have proudly acquired the re-entry technology, possessed by a few countries styling themselves as military powers, by dint of self-reliance and self-development," North Korean leader Kim Jong Un was quoted as saying. The authoritarian country's state-run media reported he made the comment after meeting scientists and technicians, following what it said was a successful ground test of a re-entry vehicle.

The report said Kim ordered the commencement of preparations for a "nuclear warhead explosion test" and test-firings of "several kinds of ballistic rockets able to carry nuclear warheads" to be conducted soon.

As with all such reports, it's hard to separate Pyongyang's wishful thinking from the current reality.

North Korea's most likely candidate for an intercontinental ballistic missile is generally known as the KN-08 - in North Korea it's called the Hwasong. The three-stage rocket has an estimated range of 5,000-6,000 kilometers (3,100-3,700 miles), longer if modified further.

That range would be ample for attacks on U.S. military bases in Japan, but not the U.S. mainland. A militarized version of the rocket used to put a North Korean satellite into orbit last month is believed to have - potentially - a much longer range that could reach the U.S.

A new version of the KN-08 was displayed at a military parade in October. IHS Jane's Defense weekly said it featured a smaller and blunter warhead shape "that could confirm U.S. intelligence assessments and North Korean claims of success in miniaturizing its nuclear warheads."

But the Pentagon has often expressed incredulity over the reliability of the KN-08 because North Korea has never tested it "end-to-end" - meaning from launch through re-entry and warhead delivery - to prove it works.

Just last week, photos of Kim, splashed across the front page of the ruling party's Rodong Sinmun newspaper, showed him standing in a hangar filled with ballistic missiles and looking happily down at a silvery orb about the size of a disco ball.

Experts say the object looks very much like a credible nuclear weapon, though it was clearly a mock-up of whatever device the North may have. Kim and his scientists certainly wouldn't have stood so close to the real thing without radioactivity protection gear. Nor would Kim, a chain smoker, likely have been holding a lit cigarette right next to it.

The message, however, was obvious: We know what you think our weaknesses are, and you might consider thinking twice.

"Well, let's see: They've paraded two different ICBMs through Pyongyang, conducted four nuclear tests, showed us a compact nuclear design sitting next to a modern re-entry vehicle in front of one of those ICBMs, and hung a giant wall map of the United States marked with targets and titled 'Mainland Strike Plan,'" he wrote. "Here's a wild guess: They are building nuclear-armed ICBMs to strike the United States! Why is this so hard to grasp?"

The timing of Pyongyang's recent moves is crucial.

It's facing a new U.N. sanctions package after its Jan. 6 nuclear test - which it claimed was of an H-bomb - and has significantly amped up its rhetoric amid unprecedentedly large-scale war games between the U.S. and South Korean militaries. Those exercises continue through April.

The country is also conducting a 70-day "loyalty campaign" ahead of a once-in-a-generation ruling party congress in May. The congress could be something of a coming-out party for Kim, a venue to emerge from the shadows of his father and grandfather and more firmly establish himself at home and abroad as North Korea's supreme leader. He could also lay out his own long-term domestic and international agenda.

Kim presumably wants to face these challenges from a position of power - and making nukes his cause celebre serves that purpose.

Standing firm on nukes bolsters his credibility with hard-liners in the military and reinforces his regime's defiant, dangerous reputation with Washington and its allies. It also has domestic propaganda value, showing how North Korea, singlehandedly and against all odds, can make breakthroughs few countries have accomplished.

Of course, that logic breaks two ways: If the country hasn't made major advances, exaggerating them is the next best thing, since its technology is notoriously difficult to evaluate.

But Lewis and other experts have expressed concern that Washington, in particular, has a pattern of not taking the North's purported capabilities seriously enough until a successful test proves their complacency to have been misplaced. While it might declare success prematurely - most outside experts doubt the recent H-bomb claims - it has an established track record of eventually getting there.

Seoul, meanwhile, was holding to its skeptical line.

Its Defense Ministry said Tuesday it remains unconvinced the North has achieved re-entry vehicle technology. Spokesman Moon Sang Gyun said the assessment is based on South Korean and U.S. intelligence. He refused to elaborate.