What Does Russian Withdrawal from Syria Mean for Moscow? 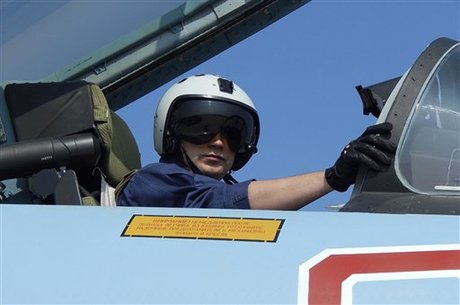 Russian President Vladimir Putin said his forces have "on the whole" completed their task in Syria as he ordered the surprise withdrawal of the bulk of Moscow's forces.

But questions remain over why the Kremlin has chosen this moment to scale back its intervention in Syria and what the move could mean for the protracted conflict, now entering its sixth year.

When Russia launched its bombing campaign in Syria last September, President Bashar Assad's forces were crumbling and Moscow's ties with the West were at their lowest since the Cold War over the conflict in Ukraine.

Five-and-a-half months and 9,000 combat sorties later, Assad's shored-up army has retaken territory and Putin has re-emerged as a key player on the world stage.

While Moscow's claims it was looking to wipe out "terrorist" groups such as Islamic State have clearly not been met, there is a lull in fighting thanks to a February ceasefire, and fresh peace talks have started in Geneva.

Analysts say this means the Kremlin's real motives have been achieved and now could be the perfect time to pull back.

"The goal of the military operation was coming out of international isolation," analyst Alexander Golts said. "This task was successfully accomplished."

Putin has thrust himself back on the global scene as a partner on Syria and can portray Russia as a major player in the Middle East as the United States has stepped back, analysts say.

The end of the campaign will also come as a relief to Russia's struggling economy, which has been battered by Western sanctions over the almost two-year conflict in Ukraine and low oil prices.

Some analysts also said Putin is wary repeating the mistakes of his Soviet predecessors who got trapped in a 10-year war in Afghanistan and is looking to get out now before Moscow gets sucked in further.

The Kremlin said Moscow would maintain an air force facility in Syria to help monitor the progress of a ceasefire.

Deputy defense minister Nikolai Pankov said Moscow would also keep striking "terrorist" targets in Syria, as the ceasefire does not apply to the Islamic State and other jihadist groups.

He did not give any details on how many soldiers would remain but a senator who heads a defense committee said it would be more than 800 people.

"It would be at least two battalions, about 800 people" protecting the two bases, as well as crews flying reconnaissance missions and advisors, senator Viktor Ozerov was quoted by Interfax as saying.

Experts say Russia's permanent military presence in the country enables it to easily redeploy at any time.

"If the deal (to withdraw) doesn't work, nothing prevents Russia from redeploying its air force if need be," Alexey Malashenko, an analyst at the Carnegie Center in Moscow, told Kommersant newspaper.

Throughout its military campaign, Russia demonstrated it did not have to be in Syria to bomb the country. Russian warships stationed in the Caspian Sea, as well as a submarine in the Mediterranean Sea, launched cruise missile attacks.

After Russia's announcement, Western diplomats expressed hope it would force a recently emboldened Assad to negotiate more seriously at the peace talks in Geneva.

The Kremlin has denied that the move shows it is unhappy with Assad and his increasingly trenchant stance in the run-up to the negotiations.

But analysts say Moscow has at times appeared at odds with Assad and publicly slapped down his claim that he wanted to recapture the whole of Syria.

"Russia is just concerned that he is a bit of a liability and a wild card," said Sarah Lain, a research fellow at the Royal United Services Institute (RUSI) in London.

Lain added that Moscow's move was meant to "force Assad's hand a little bit" by pushing him to negotiate with opposition forces.

But few believe that Moscow is giving up on its ally for good after investing blood and money to prop him up.

"I don't think the Russians are letting go of Assad," Middle East analyst Karim Emile Bitar told AFP. "It's wishful thinking to say this at this stage."