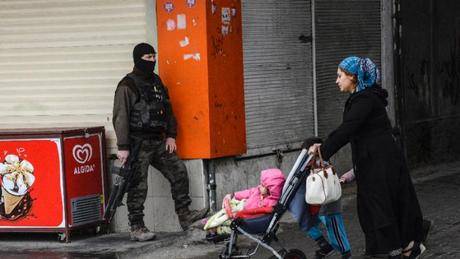 Sunday's suicide car bombing in Ankara has raised fears of an escalation in Turkey's long-running Kurdish conflict, as the country grapples with the Islamic State threat while relying on a security system weakened by a political crackdown, analysts say.

No-one has claimed responsibility for the blast which killed 35 people in the heart of the Turkish capital, but the government has pointed the finger at the outlawed Kurdistan Workers' Party (PKK), against which Ankara has waged a relentless assault since late last year.

The government said one of the bombers was a woman in her mid-20s affiliated with the PKK and trained in Syria by the People's Protection Units (YPG), a Kurdish militia group the Turkish military shelled for several days in February.

The PKK launched a bloody insurgency against the Turkish state in 1984 for greater autonomy for Kurds, a conflict that has claimed some 40,000 lives and flared up again last year after a two-year ceasefire collapsed.

"If confirmed that the attack was conducted by TAK or the PKK, it would mark a significant shift in tactics from targeting security force personnel," said Otso Iho, an analyst at IHS Jane's Terrorism and Insurgency Centre.

Since clashes restarted last year, alongside more traditional attacks targeting police and soldiers, the PKK ordered local "uprisings" in towns in the southeast, seeking to follow the methods of Kurds in Syria who have successfully fought IS jihadists.

But Can Acun, an analyst with Turkish think tank SETA, told Agence France Presse the "uprisings" had not worked and the PKK seemed to have been driven to more extreme actions.

- 'Fighting everywhere' -The current head of the PKK told Britain's Times newspaper that Ankara should expect payback for the military offensive, saying his fighters would take the conflict to Turkish towns -- and no target was off limits.

"Until recently the war with the Turkish army occurred just in the mountains. Then it moved to towns and cities. Now there will be fighting everywhere," Cemil Bayik told the Times just days before the Ankara blast.

The TAK -- seen by Ankara and some analysts as simply a deniable front for the PKK -- has threatened to strike tourist areas, targeting an important part of Turkey's economy.

But Max Abrahms, professor of political science at Northeastern University in Boston, said it would be "folly" for the PKK to target civilians in Turkey.

"Doing so will only strengthen (President Recep Tayyip) Erdogan's hand to fight Kurds and will erode international support for the Kurdish cause," Abrahms told AFP.

- Crackdown backfires? -Erdogan's Justice and Development Party (AKP) won parliamentary elections in November promising to wipe out the PKK and casting itself as the country's only defence against "chaos".

But five major bombings since July last year, killing more than 200 people, including two in Ankara in less than a month, have led some to doubt the government -- and damaged the country's image as a stable bridge between Europe and the Middle East.

In recent months Ankara has launched a crackdown which has seen journalists and academics detained and dissident media outlets muzzled or shut down, prompting European allies to worry Turkey is backsliding on democratic standards just as it seeks accelerated EU membership.

But the sweep has also hit senior police officers and judiciary -- and analysts say this has weakened the state's security services at a time when they are badly needed.

"This loss of expertise can be seen as a key reason for Turkey's security and intelligence failures," Aykan Erdemir, Senior Fellow at the Foundation for Defense of Democracies, told AFP.

Nihat Ali Ozcan, professor of international relations at Ankara's TOBB University of Economics and Technology, agreed, saying the security apparatus had been weakened at a period of "unprecedented" threat.

And there may be worse to come, Erdemir warned, saying more attacks in western Turkey could lead Ankara into further armed confrontations with Kurdish rebels in Syria and Iraq.