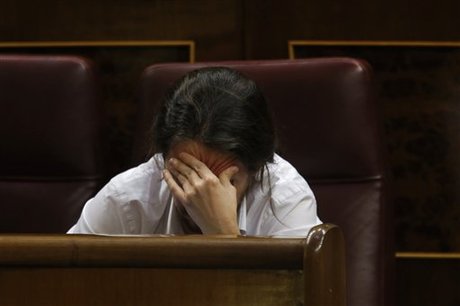 Podemos has risen at meteoric speed to become Spain's third political force in just two years, but rifts and tensions are starting to bruise the far-left party's image of watertight unity.

Led by the charismatic Pablo Iglesias, the party has been shaken by resignations and increasingly vocal regional discontent, just as it engages in delicate political maneuverings following inconclusive elections in December.

Analysts and party members say the crisis is likely to be just a bump in the road for an organization born in January 2014 out of anger over austerity, but they argue it could still weaken Podemos if left unaddressed.

"The Spanish electorate has tended to punish internal divisions in political parties, which are often perceived as struggles for power rather than for ideological positions," says Lluis Orriols, politics professor at Madrid's Carlos III University.

Spain has been locked in political paralysis since December's elections put an end to the traditional two-party system, leaving a hung parliament divided among four main parties, none of them with enough seats to govern alone.

Podemos came third with 65 seats out of 350, giving it considerable clout in subsequent coalition talks -- so much so that it blocked recent attempts by the Socialists to form a government in a parliamentary vote of confidence.

The gridlock is such that new elections could be held in June if no power-sharing agreement is found.

Speculation is rife that Podemos is divided over what strategy to take now -- whether to abstain from any subsequent parliamentary vote and let the Socialists through, or continue blocking their attempts to form a government and go to fresh elections.

Iglesias denied any rifts in a rallying letter to supporters this week, saying the allegations are designed to weaken Podemos.

"There are no currents or factions that are competing for control... and nor should there be, as this would transform us into something that we have always fought: just another party," he wrote.

But in a new sign of divisions, Iglesias late Tuesday announced the resignation of the party's third most senior leader, Sergio Pascual.

"We thank (Pascual) for the good work he has done, but recent events reveal poor management that has seriously damaged Podemos in a difficult period of negotiations to form a government of change," Iglesias said in a statement.

Podemos was riding high before the elections, but it now appears to be losing goodwill as citizens tire of the endless negotiations.

Adding insult to injury, several regional groupings that made a pact with Podemos in December, helping them win votes, are now distancing themselves from the party.

Compromis in eastern Valencia, for instance, has broken its alliance to go it alone.

And in Catalonia, popular Barcelona Mayor Ada Colau -- a former activist who helped Podemos win the northeastern region's largest number of votes in the elections -- is now going to form her own party.

Further complicating matters, 10 people resigned from the party's top executive organ in the northwestern region of Galicia last month, followed by the departure of 10 others in the equivalent "citizen's council" in Madrid.

In both cases, those who quit cited differences with their bosses. Breogan Rioboo, who was unseated as secretary-general in Galicia by the resignations, has since expressed concern over aspects of the party's direction.

He has, for instance, denounced the fact that some Podemos lawmakers also occupy high-level party positions despite past pledges to avoid accumulating posts.

"We have to strive to avoid repeating the same mistakes that other parties have made," he told AFP.

Fundamentally, these are all classic teething problems for a new party made worse by the nature of the beast, argues political communication consultant Luis Arroyo.

"Podemos is a mix of a lot of groups, from citizens' platforms to social organizations, small parties, university organizations," he says.

It prides itself on its roots as a street protest movement, as evidenced by the slogan on its webpage -- "Never again will a country be without its people."

So even at the top, leaders are obliged to consult Podemos's 350,000-strong membership base for every major decision.

And that, analysts say, is where Iglesias and his deputies may have to change things, to reorganize Podemos into a more manageable structure without antagonizing supporters who don't want to see it morph into yet another mainstream party.

"It's a shame but there's almost an imperative to adapt to the requirements of an organization," says Fernando Vallespin, politics professor at the Autonomous University of Madrid.

"And that goes against revolutionary or activist spontaneity."