EU Strides Out with Call for Control over National Budgets 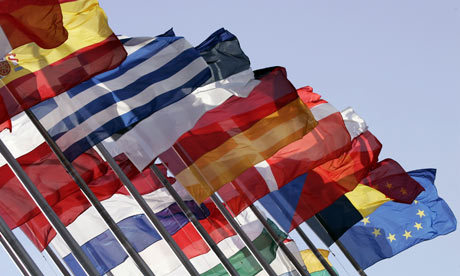 EU leaders called on Wednesday for Brussels to have power to rewrite national budgets to ensure the euro survives amid concerns that such discipline could clash with democracy.

European Commission President Jose Manuel Barroso said Brussels would have to be given the power to scrutinize national budgets and demand changes before they are adopted.

Barroso is to present legislative proposals to that effect next Wednesday, November 23.

"We are indeed now facing a truly systemic crisis that requires an even stronger commitment from all and that may require additional and very important measures," Barroso said in a key speech to the European parliament.

Such a change affecting national sovereignty over control of public finances would be a huge step in the evolution of the European Union which tried and failed to ensure disciplined economic convergence with targets in the Maastricht Treaty and Stability and Growth Pact.

Both Barroso and European Union president Herman Van Rompuy said the time had come for Eurozone nations to deepen economic integration and agree to far tighter surveillance by the European Commission in Brussels.

"Without this increased convergence, we will not be able to sustain the common currency -- this is the truth," said Barroso.

The three are working on proposals to strengthen the union which will be put to Europe's leaders at a December 9 summit, and each said the interests of the European Union whole must supersede the sum of its parts.

Van Rompuy warned that the Commission could be required to "intervene" in the drafting of national budgets.

And to clamp down on countries breaching budget rules, he said he would consider stronger sanctions, from suspending their voting rights to freezing EU funds for infrastructure projects.

The European Commission will unveil next week a set of proposals for Brussels to step up surveillance of bailed out nations as well as governments running excessive deficits.

Barroso also said he would present proposals for the issuing of jointly-backed Eurobonds, which Germany has opposed in the absence of meaningful pan-Eurozone economic governance, by the end of the year.

The crisis has caused tensions between the 17 nations using the euro, led by economic powerhouses Germany and France, and the European Union's 10 other states including Britain.

The split was evident this week with German Chancellor Angela Merkel calling for "more Europe" modeled on German economics while British Prime Minister David Cameron threatened to repatriate powers that have been given to the EU.

But Van Rompuy warned that the number one priority was to "safeguard the stability" of the 17-nation Eurozone.

"The biggest split we could have in Europe will be if we can't manage to guarantee Eurozone stability," he said, adding that the 17 euro currency states and 10 more EU partners were "all in same boat" fighting to overcome debt, recession and disparate economic performance.

Juncker said it was for this reason that the EU was striving to remove areas where unanimity across the 27 governments is required to make changes to the way it goes about its business.

He cited complaints that financial markets work "much quicker than democracy."

With Italy and Greece each installing the governments of new un-elected, former EU "technocrat" prime ministers on Wednesday, some more right-wing politicians in the parliament took umbrage.

Czech conservative Jan Zahradil added that the bid to restore fiscal discipline, while a good thing in itself, was being conducted by "dictatorship run from Brussels, Frankfurt, Berlin and Paris."