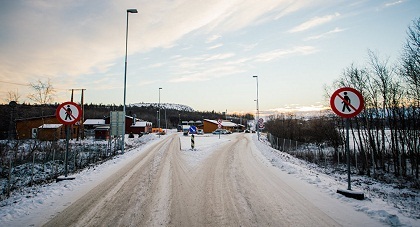 Finland and Russia have signed an agreement to close their northern border crossings to migrants, blocking off the Arctic route into the European Union, Helsinki said on Wednesday.

"Only citizens of Finland, Russia and Belarus... can use the border crossings of Salla and Raja-Jooseppi located in northern Finland," the Finnish government said in a statement.

The agreement, which is temporary and would hold for 180 days, was announced a day after President Sauli Niinisto met in Moscow with his Russian counterpart Vladimir Putin.

It was not immediately clear when the agreement would take effect because legal technicalities still need to be sorted out.

Over the past four months, more than 1,700 asylum seekers, mostly from Afghanistan and Syria, have crossed the border into Europe's passport-free Schengen zone through two of Finland's northern entry points.

Last year, around 5,500 people took the Arctic route into Norway, a Schengen member, but the flow shifted towards Finland in late November after migrants on bikes were barred from entering Norway's far North.

"The purpose of these restrictions is to prevent organized illegal immigration," the government said.