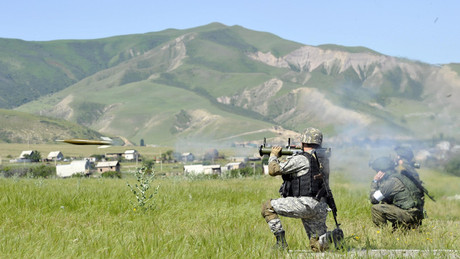 Kyrgyzstan said Friday it was in negotiations with Uzbekistan to defuse week-long tensions over disputed territory at the frontier of the two Central Asian states.

The Friday meeting of the countries' border services was called "at the initiative of the Uzbek side", the Kyrgyz border service said, after increased militarization at a disputed section of the border drew concern from a Russia-led security body earlier this week.

Tensions flared at the border between the two ex-Soviet neighbors after Uzbekistan deployed armored vehicles and around 40 troops to a disputed section of the frontier March 18.

Kyrgyzstan subsequently dispatched armored vehicles to the area before both sides agreed to partial de-militarization at the beginning of the week.

Moscow-led Collective Security Treaty Organization had expressed "concern" over the tensions and dispatched its deputy general secretary to the area.

Kyrgyz President Almazbek Atambayev said Thursday he would not attend a summit of the Russia and China-backed Shanghai Cooperation Organization (SCO) in Uzbekistan's capital Tashkent this June unless the situation is resolved.

Skirmishes are common between troops along non-delimited sections of the borders of Uzbekistan, Kyrgyzstan and Tajikistan, where local communities also clash over access to roads and water.

The criss-crossing frontiers, a legacy of Soviet policies during the era of dictator Josef Stalin, complicate everyday life for many residents in the under-developed region.