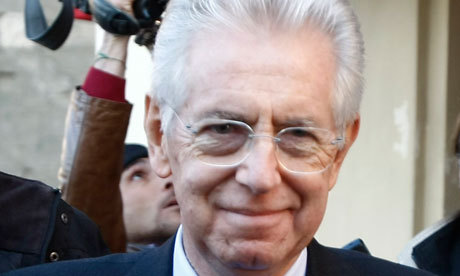 New Italian Prime Minister Mario Monti said Thursday that the future of the euro also depended on Italy during his first speech in parliament, in which he unveiled a plan to tackle the crisis.

"The future of the euro also depends on what Italy will do in the next few weeks," he said, adding that his new technocratic cabinet would implement "austerity measures" which would be balanced by "growth and equity."

The former European commissioner said Europe was living through "the most difficult years since the second world war" and warned that the European project "could not survive the collapse of the monetary union."

He said Italy must stop being considered Europe's "weak link", otherwise "we risk becoming partner to a model we have not helped build", and which could instead be built by countries "who do not want a strong Italy."

However, he added: "We don't consider the European obligations to have been imposed by external forces. It's not a case of them on one side and us on the other. We are Europe."

Monti, whose economic program had been hotly awaited by global leaders, said he intends to overhaul the labor market and pensions system, which has "unjustified privileges for certain sectors."

Both are measures the European Union has called for and their inclusion in the announced reforms is expected to reassure markets.

Monti also said he hoped to reduce labor tax and look into re-weighting estate tax, adding that the absence of property tax on main households since it was abolished under the former Silvio Berlusconi government was an Italian "anomaly."

"If we fail, if we don't carry out the necessary reforms, we will also be subjected to much harsher conditions," he warned.

The premier, who took over from the ousted billionaire Berlusconi on Wednesday, said the "absence of growth cancelled out sacrifices" and promised to respect Italy's timetable to balance its budget by 2013 and reduce its debt.

Monti's speech was well received, and the Senate speaker had to intervene and call on members of parliament to listen rather than applaud wildly.