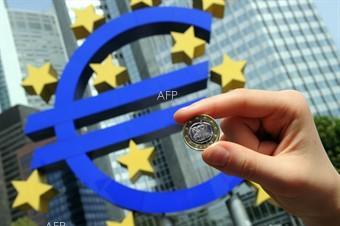 The European Union said Thursday it is helping Greece negotiate with Switzerland in a bid to claw back some the 60 billion Euros in unpaid taxes believed to be hidden in Swiss banks.

"Solutions are being explored to provide Greece with an adequate way to increase tax revenue, taking into account the vast amounts channeled to Switzerland by Greek nationals," Reinchenbach's first quarterly report said.

"We want Greece to get the best deal possible using EU and IMF experience and legal support," added an EU official on condition of anonymity.

This official said that of the missing 60 billion Euros ($81 billion) in tax revenues identified by the International Monetary Fund, just half is "theoretically collectible" and only 8.0 billion Euros likely to be recovered "sooner or later."

Athens wants to try and emulate direct deals done with Switzerland by Germany and Britain in recent months to recover proceeds due from hidden assets.

Swiss media have estimated that some 350 billion francs (282 billion Euros) in Greek assets are hidden in Switzerland.

However, a study by Bank Helvea on hidden assets from 2009 puts undeclared Greek funds at just 24 billion francs.

The Swiss National Bank said some 4.1 billion francs in Greek assets were held in 2010 in the alpine state, which has come under international pressure over its traditional bank secrecy laws.

This has become all the more important since targets for revenues from Greek state privatizations were revised heavily downwards by the outgoing government as a result of the recession, from 5.0 billion Euros by the end of 2011 to just 1.3 billion Euros.

Meanwhile, a plan to build a new motorway network forecast to add two percentage points to the country's growth over coming years, is snarled up in litigation involving many of Europe's biggest civil engineering firms, Reinchenbach said.

Brussels is playing very high risk game. Greeks have moved some $81b into Swiss banks, looking for a safe harbor if (when) Greece defaults, switches back to the Drachma, etc. Now Brussels is in negotiations with Switzerland to force "repatriation" of all this money to Greek banks, claiming it was "tax evasion", though it is wealth, not subject to any Greek taxes.

Since this would make the price of gold astronomical, Brussels would almost have to outlaw the private ownership of gold.

The same safety approach is now causing both Greeks and Italians to go on a buying binge of land in England, so they will have some non-Euro place to flee. England may not be far enough away, so their next destination for themselves and their wealth is America.