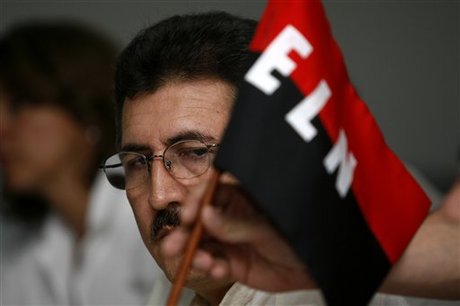 "Pleased by the release of (Choco department) ex governor Patrocinio Sanchez Montes de Oca. Much support to him and family. #welcometofreedom," the Choco governor's office said on Twitter.

The government launched peace negotiations on Wednesday with the ELN, setting its sights on a total end to a bloody half-century conflict.

Bogota hopes the talks with the ELN will bring it on board alongside Colombia's biggest rebel force, the Revolutionary Armed Forces of Colombia (FARC), in a bid to end what is seen as the last major armed confrontation in the West.

The ELN is a leftist group like the FARC, but they have fought as rivals for territory in a many-sided conflict that started as a peasant uprising in 1964.

While the FARC has observed a ceasefire since last year as its own peace talks have advanced, the ELN has continued attacks.

Accords bringing in the government and the FARC and ELN would establish peace between the main remaining players in a conflict which over the decades has drawn in right- and left-wing guerrillas, government troops and drug trafficking gangs.

The ELN on Saturday also freed a police patrolman it kidnapped on March 20.