Early Elections Threaten in Spain as Coalition Talks Break down 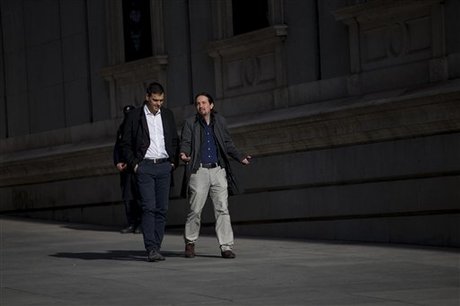 Three-way talks headed by Spain's Socialists to form a new government broke down Friday less than 24 hours after they began, increasing the likelihood of a fresh election in June which would be the second in six months.

Negotiators from the Socialists, far-left party Podemos and centrist upstart Ciudadanos met on Thursday for two hours for the first time to try to end over three months of stalemate following an inconclusive December 20 general election.

Podemos presented a 20-point plan which included measures such as a guaranteed income for families below the poverty line but the party's leader, Pablo Iglesias, said Friday the others had said "no to everything".

"We left the meeting very disappointed," he said.

Podemos will now hold a party referendum on April 14-16 to ask party members if it should back a Socialist and Ciudadanos-led government or support a purely leftist "government of change" made up of the Socialists, Podemos and several small regional parties, he added.

Iglesias hinted he would step down as leader of Podemos if party members voted to back a government with the Socialists and Ciudadanos, saying he would assume his "responsibilities" if this happened.

Meanwhile, the leader of Ciudadanos, Albert Rivera, accused Podemos of having taken part in the talks "essentially to blow up" a pact his party signed with the Socialists in February setting out 200 common policy positions.

"Podemos did not come to bring nuances or defend changes" to the pact "but rather to blow it up, explode, liquidate it", he said during an interview with private television Antena 3.

The December polls put an end to the traditional two-party system as voters fed up with austerity, unemployment and corruption scandals flocked to new parties, leaving a hung parliament divided among four main groupings, none of them with enough seats to govern alone.

Unless parties can agree on a power-sharing agreement by May 2, fresh polls will be called -- most likely on June 26.

This would extend the paralysis that has gripped Spain since December's general elections, at a time when the country is emerging limping out of a damaging financial crisis.

The Socialists were tasked with forming a government after acting Prime Minister Mariano Rajoy -- whose conservative Popular Party came first in elections with 123 parliamentary seats out of 350 -- gave up attempts to do so due to lack of support from other groupings.

That is far less than is needed to push a government through a necessary parliamentary vote of confidence, which requires a simple majority. The Socialists tried in early March and were defeated.

They then convinced Podemos to join three-way talks with Ciudadanos.

But Podemos, which is close to Greece's ruling Syriza, fiercely opposes the Socialists' pact with Ciudadanos, finding many of the measures to be too economically liberal.

The talks have also been hampered by friction between the party leaders.

Iglesias and Rivera traded accusations of cronyism, intolerance and shady financing in parliament on Wednesday, just 24 hours before the three-way meeting.

The latest opinion poll by the CIS research center revealed that close to 80 percent of the population said the political situation was either "bad" or "very bad."

And polls show fresh elections would produce another hung parliament and that Podemos has lost support since the December polls.