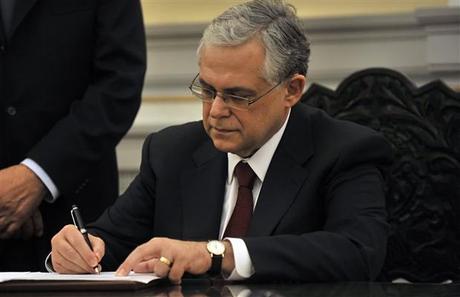 Greece promised to slash its deficit in a 2012 budget unveiled Friday thanks to a planned debt deal with banks, but warned of a deeper than expected recession next year as austerity measures bite.

The blueprint was published as auditors from the European Union, the European Central Bank and the International Monetary Fund visited Athens for negotiations on a debt rescue deal brokered by the Eurozone last month.

The figures forecast that Greece's public deficit will drop to 5.4 percent of gross domestic product (GDP) in 2012 from 9.0 percent this year, an ambitious target given the previous forecast for next year of 6.8 percent.

At the same time, the unity coalition under former ECB deputy chief Lucas Papademos estimated that the economy would shrink next year by 2.8 percent, a deeper contraction than the 2.5 percent previously forecast.

Nevertheless that will still represent an improvement from the expected 5.5 percent contraction this year, the third year of recession.

Finance Minister Evangelos Venizelos said he hoped lawmakers would approve the budget before an EU summit on December 9, an indication of the new government's determination to appease its creditors in return for urgently needed loans.

He also said no new austerity measures were needed beyond those agreed by the previous government, but the deeply unpopular reforms, including slashing the public sector and overhauling the tax system, must still be forced through.

Many Greeks are already at breaking point after two years of belt-tightening involving sweeping pay cuts and tax rises, and more than 40,000 people joined protests against the measures on Thursday in Athens and Thessaloniki.

The estimated deficit figures would put Greece well within the goals agreed with its EU and IMF creditors, after it missed its 7.4 percent target by a long shot this year, but they are highly dependent on a still shaky debt deal.

Eurozone leaders agreed with the banks last month to write off 50 percent of Greek debt as part of a second rescue plan which also provide Athens with 100 billion Euros in loans and 30 billion Euros to recapitalize its banks.

The man leading the talks on behalf of the banks, Institute of International Finance chief Charles Dallara, said Thursday he hoped to reach agreement on the details of the deal, worth 100 billion Euros, within weeks.

Venizelos said he hoped all of Greece's private creditors would sign up to one of two or three models being hammered out, adding: "We will do all we can."

According to the budget, the government's interest payments on its debt will fall to 12.75 billion Euros in 2012 following the debt deal from 16.38 billion euros this year. Without the agreement, the payments would rise to 17.9 billion.

Papademos' new government of socialists, conservatives and a small far-right party is in a race against time to implement the reforms demanded by the EU and IMF, most pressingly to release eight billion Euros in loans frozen since August.

The funds, which must be delivered by December 15 to stop Greece going bankrupt, are part of a 110-billion-euro bailout agreed in May 2010 which have been held up by delays in the implementation of reforms and a political crisis.

Papademos and his finance minister will meet with the representatives of the ECB, the EU and the IMF in Athens on Friday, while the so-called troika will meet with the leaders of the three coalition parties on Saturday, officials said.

Amid the economic turmoil, Greece is also struggling to raise 50 billion Euros through privatizations by 2015 as agreed as part of its bailout loans.