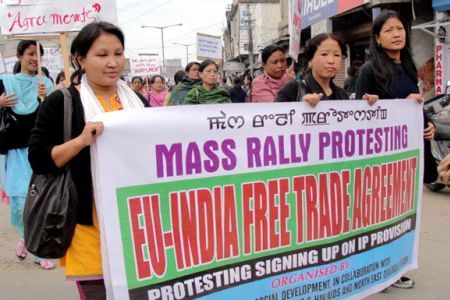 The European Union and India will work at "full steam" in talks due to start next week on clinching an ambitious free trade pact ahead of a February deadline, the EU said Saturday.

India has been in discussions with the EU, its biggest trading partner, since June 2007 to liberalize trade in goods, services and investment through a free trade agreement.

"The EU and India are working full steam ahead to find solutions which are acceptable to both sides," EU trade spokesman John Clancy said in a statement.

Frustrated by delays in reaching an agreement, European governments threatened in September to break off talks with India on the free-trade deal and set a February 12 deadline to conclude a pact.

Thirteen rounds of talks have already taken place. More work is needed on issues such as tariffs, services and procurement policy, the EU said.

The EU statement said negotiations would begin from Monday and last until December 5. The talks are being held in Brussels, an EU spokeswoman said.

"Intense negotiations will continue over the coming months to effectively solve the remaining core issues between now and the EU-India summit, which is scheduled for February 10" in New Delhi, Clancy said.

Earlier in the week India's Commerce Minister Anand Sharma expressed satisfaction with the progress of negotiations.

But Sharma's comments came at the same time as a top German government official expressed concern in Berlin over the "painfully slow" progress of talks.

Germany's head of the Foreign Trade Division, Berend Diekmann, said the EU bloc and India were "far away" from reaching an agreement on a deal and that there was no way a treaty could be signed before the India-EU summit.

"India and the EU are far away from each other as far as the negotiations are concerned," Diekmann was quoted by the Press Trust of India as saying.

The two sides originally hoped to conclude a wide-ranging deal by 2010 that could increase bilateral trade to $237 billion annually by 2015 from around $92 billion currently.