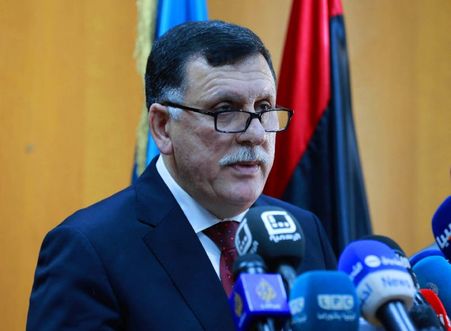 The head of Libya's unity government has announced plans for a concerted campaign to drive the Islamic State group out of the North African country, but without foreign intervention.

In remarks marking almost 30 days since his arrival in Tripoli to assert the authority of the U.N.-backed Government of National Accord (GNA), Fayez al-Sarraj also appealed for a united Libya.

He said there were many challenges facing his government, which in order to begin operating has yet to receive the endorsement of the country's elected parliament.

A formal endorsement has been repeatedly postponed, although earlier this month dozens of parliamentarians in a statement expressed confidence in the new government.

Sarraj has nevertheless pushed to assert the GNA's authority since arriving in Tripoli on March 30 under naval escort, and the new government has already taken control of several ministries.

In a on Thursday speech addressed to the "great Libyan people" he said the jihadist IS would be routed by "Libyan hands and not through any foreign intervention".

"We have begun to concretely implement a national strategy to put an end to this scourge," Sarraj said, referring to the Sunni extremist group which has fed on years of chaos to establish a stronghold on Libya's Mediterranean coast.

His comments came hours after the unity government announced plans to establish a joint military command to tackle IS.

It called on "all military forces" in Libya to await instructions and not to launch any unilateral offensive on Sirte, the hometown of slain dictator Moammar Gadhafi that is now controlled by IS.

The announcement of the joint military command was welcomed by the U.N. special envoy for Libya, Martin Kobler.

The unity government fears that separate operations in Sirte could spark clashes between the multitude of different fighting forces in Libya and play into the jihadists' hands.

Libya has been roiled by turmoil since the 2011 ouster and killing of Gadhafi in a NATO-backed uprising, with rival forces vying for control of the oil-rich country's wealth.

Sarraj said contacts would be made with "all military commands" across the country, insisting on the need for a "united effort" to confront the jihadists.

He said the military commands would be asked to "launch the necessary preparations to begin the operation to liberate Sirte".

IS overran the coastal city 450 kilometers (280 miles) east of Tripoli last June, and has transformed it into a training camp for Libyan and foreign militants.

With its port and airport, there are growing fears that IS could use Sirte as a staging post for attacks on European soil.

Western powers including the United States, Britain and France have openly considered international military intervention in Libya against IS.

Experts have said that any future foreign strikes could target Sirte as well as the region around it.

The jihadist group is estimated to have around 5,000 fighters in Libya, and is trying to attract hundreds more.

Sarraj warned on Thursday that internal conflicts threaten the country's unity and sovereignty.

"The challenges still facing us are real," he said, adding that he had high hopes for the support of the Libyan people to overcome them.