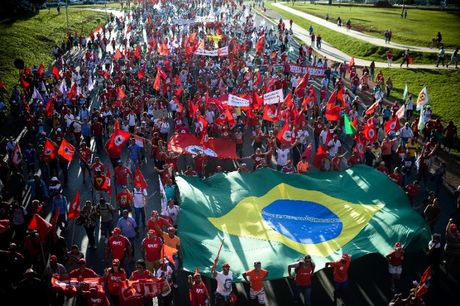 After 13 years in power, the Workers' Party has been forced out by Brazilian president Dilma Rousseff's suspension and impeachment trial, its emblematic red star tarnished by corruption and economic collapse.

Can it battle back?

Lula, a former steelworker, presided over a watershed economic boom, becoming one of the most popular presidents in Brazilian history.

That glow was still shining when Rousseff, his hand-picked successor, won the presidency in 2010. And it was just bright enough to get her re-elected in 2014, despite an economic downturn, a mounting corruption scandal and spreading middle-class discontent that erupted into huge protests the previous year.

But the Senate's decision Thursday to suspend Rousseff from office for up to six months -- she is likely never to return -- brought the once unstoppable Workers' Party (PT) crashing to the ground.

Rousseff ingloriously ceded power to her vice president-turned-nemesis, Michel Temer, a center-right politician who broke his awkward alliance with her in March and joined the push to impeach her on charges of fudging the government's accounts.

If two-thirds of senators vote to remove her at the end of her impeachment trial, Rousseff will be gone for good and Temer will hold power until the next elections in 2018.

But don't count the PT out just yet, political analysts say.

"The PT has the best network of any party, with representatives in 98 percent of Brazil's cities," Adriano Codato of the University of Parana said. "This huge organizational force won't just disappear overnight."

It won't be easy going, however.

The PT faces a "slaughter" in local elections in October, Codato predicted, saying the corruption scandal engulfing Brazilian politics has tainted its "brand."

Although Rousseff does not face charges in the scandal, her opponents say at best she is guilty of letting it happen.

And a host of top PT figures, including Lula, have been implicated in the multi-billion-dollar bribery and embezzlement scheme centered on state oil company Petrobras.

"The PT has been the victim of its mistakes -- such as its corruption problems, which it never resolved -- and of its successes, like university quotas for black students, which unleashed 'classist racism'" among disgruntled whites, Codato said.

The PT had governed for the poorest and wealthiest Brazilians, forgetting the middle class, which once strongly supported it precisely because of its platform as the "party of ethics," he added.

Party veteran Tarso Genro, who served in Lula's cabinet but is vocally critical of the PT, said it is time for the organization to reinvent itself.

He criticized the decision to team up with Temer's PMDB, a powerful party known for its lack of ideology and knack for holding the keys to the government pork barrel.

"The PT needs to examine its successes, of which there were many, and also its mistakes and limitations, to deal with this new era," he told AFP in an email interview.

Despite its flaws, the PT retains a strong support base thanks to social programs that helped lift tens of millions of people from poverty.

If elections were held now, Lula would be the leading candidate with some 20 percent of the vote, according to opinion polls.

Lula's corruption case is really about "taking him out of the race" for 2018, when he will be eligible to run for president again -- if the graft probe doesn't fell him first, Genro said.

But the party would have to fully "reorganize the left," he added.

The PT disappointed many original supporters by foregoing issues such as land, health and electoral reforms to pursue opportunistic alliances with power-brokers such as the PSDB, often necessary to get anything done in Brazil's highly fragmented political system.

"The PT has a good foundation, but it has to renew itself," said Fabio Malini of the Federal University of Parana.

"The PT's main legacy is better income distribution, but it will have to return to its program, which it abandoned a long time ago."