Libya Unity Govt. Says it Wants Warplanes to Fight IS 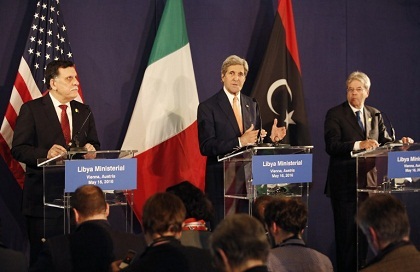 Libya's unity government called Tuesday for warplanes and helicopters to fight jihadists as it hailed international support for granting it an exemption to a longstanding embargo on weapons sales.

On Monday, the United States, Italy and Libya's allies and neighbors agreed in Vienna to arm the U.N.-backed Government of National Accord (GNA) to confront the threat from the Islamic State (IS) jihadist group.

The agreement comes as rival Libyan forces prepare separate offensives against IS, which has taken advantage of the chaos since the 2011 revolution to establish a new stronghold across the Mediterranean from Europe.

International backing for an exemption to the embargo, in place since 2011, is "fundamental to the creation of a strong army... capable of fighting the jihadist Islamic State group and other extremist groups", GNA deputy head Mussa al-Kony told AFP.

U.S. Secretary of State John Kerry said a 25-member group agreed to exempt the GNA from the U.N. arms embargo imposed since the uprising against Moammar Gadhafi's regime five years ago.

"State institutions have collapsed because the army itself fell apart. Our priority today is to unify this institution and revive it, but without weapons we cannot do this," Kony said.

"What we want is to acquire all sorts of weaponry... but our priority is aircraft," he said.

"We want pilots, helicopters and warplanes."

On Monday in Vienna, GNA chief Fayez al-Sarraj requested both equipment and training which the international ministers present were ready to support.

World powers, Kerry said, will support the GNA's exemption "from the U.N. arms embargo to acquire those weapons and bullets needed to fight Daesh (IS) and other terrorist groups."

Sarraj has sought for the past month and a half to assert the GNA's authority in Tripoli.

It comes as IS seeks to expand westwards out of its stronghold Sirte, Gadhafi's hometown on the Mediterranean coast which it has controlled since last June.

Europe fears the jihadists could use Sirte's port and airport as a springboard to attack the continent.

The international community, particularly European powers, are also concerned about a stream of refugees and migrants crossing the Mediterranean from Libya's unsecured coast.

Libya was left with two rival administrations after a militia alliance took over Tripoli in mid-2014, setting up its own authority and forcing the elected parliament to flee to Tobruk in the country's far east.

The Tripoli-based unity government, formed under a December power-sharing deal agreed by some lawmakers from both sides, has announced the formation of a new military command to take charge of the battle against IS.

But armed forces loyal to the other government based in the far east are also preparing to battle IS under the command of General Khalifa Haftar.

Ahmed al-Mesmari, a spokesman for Haftar's forces, said the decision to ease the arms embargo for the benefit of the GNA only was "illegal", adding that the forces of the unity government are "a new front for militias."

He said the decision will "create chaos, and we will turn to countries that support the army in order to arm ourselves."

IS jihadists have this month advanced from Sirte into territory held by the unity government, capturing key checkpoints along the coast.

Forces loyal to the GNA, backed by fighter jets, on Tuesday fought IS as they attempted to recapture a major crossroads where the highway along the Mediterranean meets the main road south into the desert interior.

The Abu Grein crossroads lies 120 kilometers south of the third city of Misrata and its seizure by IS this month prompted militia there to mobilize.

Four members of the pro-GNA forces were killed Tuesday -- three by a landmine and one in clashes, according to a Facebook page of the GNA forces.