Tunisia President Says its War on 'Terror' has Cost $4 bn 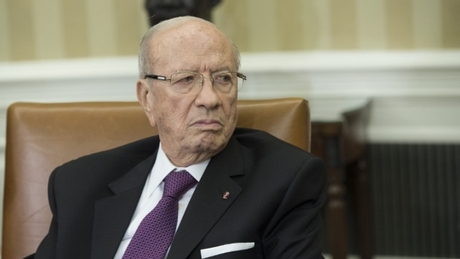 Tunisia's President Beji Caid Essebsi said in Doha on Thursday that his country's battle to fight "terrorism" has cost it around $4 billion diverted away from the country's economy.

"The war against terrorism has cost Tunisia a lot, about $4 billion," Essebsi told reporters in Qatar, at the end of an official three-day visit to the Gulf country.

"It could have been invested in economic matters but unfortunately in this situation it was necessary to give a priority to fighting terrorism and achieving security."

Essebsi added that there was "no future" for political Islam in the country.

Tunisia, the birthplace of the Arab Spring, has suffered from a wave of jihadist violence since its 2011 uprising which saw longtime dictator Zine El Abidine Ben Ali ousted.

Tunisia was hit by a series of deadly Islamic State group attacks last year on foreign holidaymakers and security forces that killed dozens and dealt a devastating blow to its lucrative tourism industry.

At the same time, thousands of Tunisians have joined jihadist movements including IS in Syria, Iraq and Libya.

The president also said on Thursday that Tunisia wanted to strengthen a 200-kilometer long (125-mile) barrier stretching around half the length of its border with Libya to try and prevent militants from infiltrating.

"It (the barrier) should be strengthened by a remote early-warning device from about 12 kilometers (7.5 miles) or more, and this device is nearing completion," said Essebsi, who was speaking in Arabic.

"There is cooperation with other countries, because this system is costly."

Tunisia was working with specialists from America and Germany and the early warning device should secure the border "within four months," he added.

Talks, according the state Qatar News Agency (QNA), focused on economy and security.

Essebsi was accompanied on the trip by Zied Laadhari, Tunisia's employment minister, who said the visit could ultimately increase the number of Tunisian laborers working in Qatar.