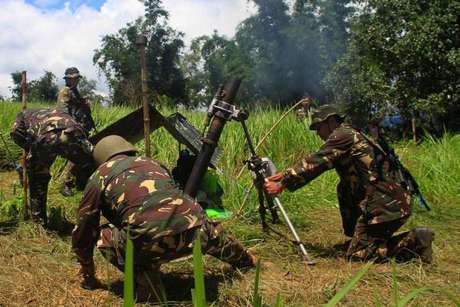 Two Philippine soldiers were killed during clashes with Islamic militants trying to regain their base in a remote, mountainous region of the southern Philippines, the military said on Monday.

Ten soldiers were also wounded and about 2,000 residents displaced during the clashes with gunmen from the Maute group which has pledged allegiance to the Islamic State group.

Security officials told AFP the operation against the Maute group in the small Muslim-populated farming town of Butig in Lanao del Sur province began on Wednesday and was continuing.

The offensive was launched after the militants moved back into territory that the military secured during deadly clashes in February, they said.

"They came back to their camp and we were not able to prevent it because our troops were deployed to other areas," said Colonel Roseller Murillo, the military chief with responsibility for the area.

Murillo said soldiers had to leave the area to provide security elsewhere for the national elections on May 9.

He said, based on intelligence reports, about 37 militants were believed to have been killed. But he said no bodies had been recovered and AFP could not independently verify the death toll.

General Gerardo Barrientos, commander of the division overseeing the offensive, said the group was believed to have fewer than 100 fighters, but had been a continued threat in the area even after losing their headquarters in February.

He said the military launched the latest offensive after the militants bombed power transmission towers, and abducted and beheaded two workers at a local sawmill in April.

"The group intends to regain the area," Barrientos said.

The southern Philippines has been plagued by a Muslim separatist insurgency for over four decades, with the conflict leaving more than 120,000 dead.

The future of peace talks under incoming president Rodrigo Duterte is unclear. He has said he can secure peace by establishing a federal form of government, devolving power to the regions.

Barrientos said the Maute group was believed to have links with the Southeast Asian terror group Jemaah Islamiyah, which carried out the 2002 bombings in the Indonesian holiday island of Bali, killing 202 people.

Jemaah Islamiyah militants have had a long presence in the southern Philippines and have trained locals.