Trying to Solve the Israeli-Palestinian Conflict 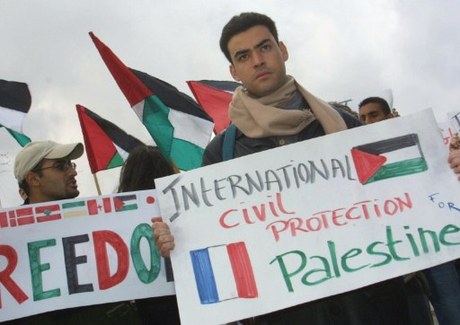 A Paris meeting Friday on the Israeli-Palestinian conflict is the latest attempt to tackle one of the world's most stubborn diplomatic issues.

Here is a rundown of past efforts.

Oslo to Camp David- OSLO ACCORDS: September 13, 1993: After six months of secret talks in Oslo, Israel and the Palestine Liberation Organization sign in Washington a mutual recognition agreement that allows for five years of Palestinian autonomy aimed at striking a final deal no later than May 1999.

Under the deal, Israel is to withdraw from 70 percent of territory it occupies in the Gaza Strip and West Bank, and in July 1994, PLO leader Yasser Arafat returns from 27 years in exile.

- OSLO II: September 28, 1995: A new interim accord is negotiated in Taba, Egypt and signed in Washington. It foresees a gradual Israeli West Bank withdrawal. But before that happens, Israeli prime minister Yitzhak Rabin is assassinated on November 4 by a Jewish extremist.

- WYE PLANTATION: October 23, 1998: A deal signed at Wye Plantation in the U.S. calls for a gradual Israeli withdrawal from 13 percent of the land it still occupies in the West Bank, which would leave the Palestinians controlling 40 percent. Two months later, Israel freezes the deal after pulling back from two percent of occupied territory.

An accord signed on September 5, 1999 in Sharm el-Sheikh, Egypt, gives the initiative fresh momentum, and targets September 13, 2000 for a final agreement.

- CAMP DAVID: July 11-25, 2000: At a summit at Camp David in the U.S., Palestinians and Israelis remain deadlocked over the questions of a final status for Jerusalem and compensation for Palestinian refugees from 1948. Two months later, the second Palestinian intifada, or uprising, breaks out, lasting until 2005. The Israeli army temporarily reoccupies almost the entire West Bank.

String of failures- ARAB INITIATIVE of March 28, 2002: After the failure in January 2001 of a summit in Taba, an Arab summit in Beirut adopts a Saudi initiative offering diplomatic relations between Israel and Arab countries in exchange for an Israeli withdrawal from occupied territories and a solution to the Palestinian refugee issue.

- ROAD MAP of April 30, 2003: A diplomatic quartet comprised of the European Union, Russia, United Nations and United States publishes a document dubbed a "road map" towards a Palestinian state in 2005 once Palestinian attacks and Jewish settler activity cease. Israel and the Palestinians commit to its application on June 4, 2003 in Aqaba, Jordan in the presence of U.S. president George W. Bush.

- ANNAPOLIS SUMMIT of November 27, 2007: Israelis and Palestinians commit to negotiating an agreement by the end of 2008 during a conference that includes Israel and 15 Arab countries for the first time. The Palestinian group Hamas, which now controls the Gaza Strip following Israel's withdrawal in 2005, rejects the agreement. Palestinian Authority envoys pull out of talks after Israel launches an offensive in Gaza in late 2008.

Fresh efforts- ABORTED DIALOGUE: September 2, 2010: After a 20-month hiatus, direct talks briefly resume in Washington with a meeting between Palestinian President Mahmoud Abbas and Israeli Prime Minister Benjamin Netanyahu, who accepted the principle of a Palestinian state in June 2009. The talks break down when Israeli resumes construction of West Bank settlements on September 26.

- NINE MONTHS from July 29, 2013: U.S. Secretary of State John Kerry announces the launch of nine months of direct talks, the first in three years. They are suspended by Israel on April 23, 2014, a week before term, after the announcement of a reconciliation deal between the PLO's Fatah and Hamas.

- FRENCH INITIATIVE of June 3, 2016: Paris hosts a ministerial-level meeting, without Israel or the Palestinians, to prepare an international conference on the Middle East.