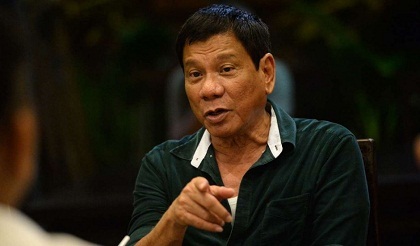 U.N. expert on summary executions Christof Heyns described recent remarks by Duterte as "irresponsible in the extreme, and unbecoming of any leader."

He also last week said there was justification for killing journalists who took bribes or engaged in other corrupt activities, touching off fears this could incite more murders of media workers.

"A message of this nature amounts to incitement to violence and killing, in a nation already ranked as the second-deadliest country for journalists," Heyns warned in a statement.

One hundred and seventy-four journalists have been murdered in the Philippines since a chaotic and corruption-plagued democracy replaced the dictatorship of Ferdinand Marcos three decades ago.

"Justifying the killing of journalists on the basis of how they conduct their professional activities can be understood as a permissive signal to potential killers that the murder of journalists is acceptable in certain circumstances and would not be punished," he said in the statement.

"This position is even more disturbing when one considers that the Philippines is still struggling to ensure accountability to notorious cases of violence against journalists," he said.

He pointed especially to the massacre in the conflict-wracked southern province of Maguindanao in November 2009, in which the son of a political warlord and his bodyguards gunned down 58 people, including 32 journalists -- making it one of the world's deadliest attacks on media workers.

Kaye also slammed Duterte's warning to journalists that he could not guarantee their safety "if you disrespect a person".

"Such provocative messages indicate to any person who is displeased by the work of a journalist or an activist, for example, that they can attack or kill them without fear of sanction," he said.

Duterte may not take the experts' concerns to heart: Last week he launched a seemingly unprovoked profanity-laced attack on the U.N., after facing criticism from foreign and local medial groups.

"Fuck you U.N.... Shut up all of you," he told a news conference Thursday night.