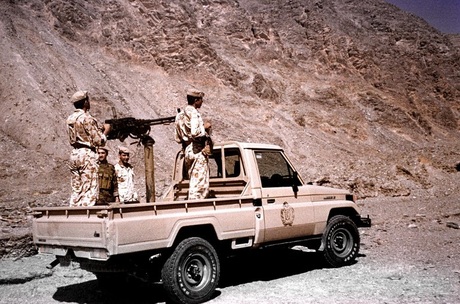 Wednesday evening's fighting took place in Oshnavieh in the northwest, the Tasnim news agency said, citing a statement from the Guards.

Two separate groups of rebels had slipped across the border to carry out acts of "sabotage" and "create insecurity among the population," it added.

Oshnavieh lies around 20 kilometers (12 miles) from the border with the autonomous Kurdish region of northern Iraq.

"A large quantity of arms and ammunition was seized from this terrorist group," Ashtari told Tasnim.

The incursion comes days after five Kurdish rebels and five jihadists were killed, along with a police officer, in separate clashes in the northwest and southeast of Iran.

"A team of five from the PJAK terrorist splinter group... has been identified and destroyed in the Sardasht region" on the Iraqi border, a Guards statement said on Monday.

One police officer and five militants were killed in the fighting, which pitted Iranian forces against Sunni militant group Jaish-ul Adl.