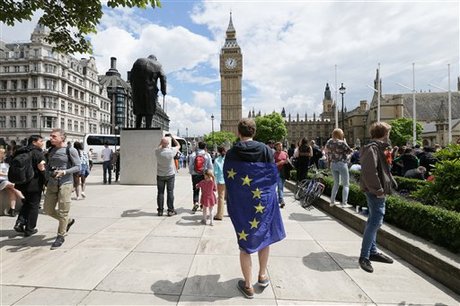 Will Brexit threaten London's long-booming economy? The British capital fears investors and bankers could flee the city after the shock nationwide vote, threatening its coveted reputation as a global financial hub.

Some 60 percent of Londoners voted to stay in the EU in Thursday's historic referendum, but the rest of the country cast their ballots overwhelmingly to leave.

And the capital's 8.6 million residents, whose GDP is about the same as that of oil-rich Norway, are anxious about the impact on the city's economy.

The fear is that London will no longer be able to claim to serve as the gateway for U.S. and Asian businesses into Europe's vast single market.

"Some firms that saw London as a platform for serving the integrated EU market will relocate at least part of their headquarters' functions to other cities within the EU," said Greg Clark of the Brookings Institution.

A first bank, U.S. giant JPMorgan which employs around 16,000 staff in the United Kingdom, said Friday that it "may need to make changes to our European legal entity structure and the location of some roles".

It gave no figures, but chairman and chief executive Jamie Dimon previously said that up to 4,000 jobs could move out of the UK.

According to ratings agency Standard and Poor's, a fifth of all global banking activity takes place in London.

A haemorrhaging of bankers would hit the city: the financial sector provides one in three jobs, or some 1.25 million.

Services overall represent 85 percent of jobs, having completely supplanted manufacturing which historically was the driving force of the capital.

"Although we will be outside the EU, it is crucial that we remain part of the single market," pro-EU London Mayor Sadiq Khan said Friday.

"It is crucial that London has a voice at the table during those renegotiations," added the Labor mayor, who took over in May from Conservative Boris Johnson -- who went on to spearhead the "Leave" camp.

A petition for London to have independence from the United Kingdom and make an application to join the EU started partly as a stunt.

But it highlighted deep concerns and had by Saturday evening garnered more than 150,000 signatures for a so-called "Lexit".

Despite these fears, Clark of the Brookings Institution said that in the end "the total number of net job losses in London may not be high, as corporations will re-organize rather than leave."

"London will remain a good location to service global markets," he added.

The city, whose GDP grew by 3.3 percent last year against 2.3 percent for the whole country, remains well-placed: it speaks English, the international language of business, as well as being cosmopolitan and culturally rich.

London's successful hosting of the 2012 Olympics, which saw huge investment notably in transport infrastructure, burnished its reputation as a global capital.

If well-paid bankers and other expatriates flee London for Frankfurt, Paris or Dublin, a whole swathe of the economy which depends on higher spending power will suffer, from luxury real estate agencies to select private schools.

The first sector to pay the price might be bricks and mortar.

"In our view the decision to leave the EU will be most keenly felt in the London housing market which is fully valued and already facing headwinds," said real estate specialists Hometrack.

"History shows that external shocks have led to falls in turnover by as much as 20 percent," it added.

That kind of slump could put downward pressure on prices, actually good news finally for many prospective buyers and renters in a city where homes have become increasingly unaffordable, and where prices have been rising by 13 percent a year.

"London will also present a diversification opportunity for investors who want to hedge against the EU," for example if another euro currency crisis hits, "but be part of Europe's growth story," he said.

"London may even garner a 'first (EU) leaver' advantage. The British pound has always served as a currency hedge for the euro, and this function may even strengthen it," he said.