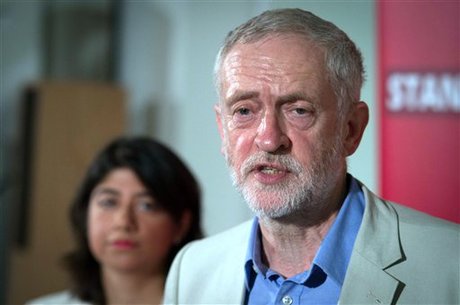 The head of Britain's Labor Party, Jeremy Corbyn, projects an image of meekness, but the Brexit crisis now ripping his beloved party asunder has revealed a steely streak underneath.

Corbyn is facing a revolt by Labor MPs who are demanding he resign for his lukewarm campaigning to stay in the European Union -- a key factor, say the critics, in last Thursday's shock result.

A third of Corbyn's shadow cabinet have quit, but he has stood firm, warning the rebels they face the fury of the party's grassroots if they force a leadership vote.

"I was elected by hundreds of thousands of Labor party members and supporters with an overwhelming mandate for a different kind of politics," he said in a statement.

Corbyn biographer Rosa Prince says the veteran socialist's resolve must not be underestimated.

"He portrays himself as a reluctant hero -– but nothing could be further from the truth. For 50 years, Jeremy Corbyn has schemed and plotted to get ahead in politics," she wrote in the Daily Telegraph.

"Today, like a child tearfully clutching his football long after the other kids have gone home, he clings to the leadership with an iron grip that belies the myth he was loathe to serve."

The 66-year-old, an ardent republican, only stood for the leadership as a 100/1 outsider following Labor's weak performance at last year's general election won by Prime Minister David Cameron's center-right Conservatives.

The veteran socialist's dizzying ascent prompted dire warnings from party grandees like Tony Blair that his policies would prove too left-wing to draw wide support from British voters, driving Labor to disaster at the ballot box.

But Corbyn benefited from the party's decision to open the vote to all Labor members.

He claimed a stunning victory in September's leadership election after mobilizing the far-left and youth vote.

His huge mandate torpedoed any attempts to halt his rise, but the prospect of a general election within months following the resignation of Prime Minister David Cameron has refocused the party's parliamentarians on installing a more mainstream candidate.

Party deputy leader Tom Watson has warned Corbyn that a leadership challenge is imminent, according to reports.

"Those who want to change Labor's leadership will have to stand in a democratic election, in which I will be a candidate," responded the leader.

Corbyn believes he can still count on those who elected him, but the results of the EU referendum paint a more uncertain picture.

Polling during the campaign revealed members to be unsure of the party's position, largely driven by doubts over Corbyn's commitment to the EU, which he long opposed as a neoliberal project.

"It is fairly plain that Corbyn's emotional attachment is, as before, to Brexit, and that he is nominally for Remain solely because his party's preference demands it," wrote the Independent's Matthew Norman.

"When he ran for the leadership, Corbyn's appeal was built on being that mythical beast, 'a different politician'; someone who sticks rigidly to his principles, however out of vogue they may be.

"How better to ruin that reputation, and leave the idealistic young who most fervently supported him feeling betrayed, than by pretending for reasons of political expediency to support Remain?"

Corbyn grew up in a political family -- his parents met as activists during the Spanish Civil War -- and worked for trade unions before being elected to the Commons in 1983.

He had never held any major office and was a serial backbench rebel, voting against his party's line repeatedly and championing human rights and policies to help the poor.

So committed is he to socialism that his second marriage reportedly broke up over his opposition to sending his son to a state-run school that selects children by academic ability rather than a school open to all.

As leader, Corbyn has opposed austerity and the renewal of Britain's Trident nuclear submarine missile system, and claimed credit for forcing the government to backtrack on cutting tax credits for low earners.