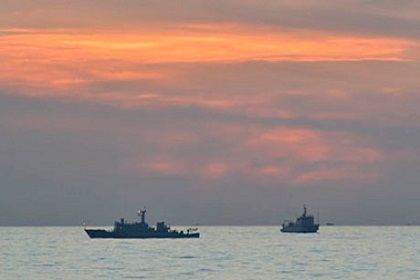 Beijing will reject any ruling by an international tribunal in a contentious case brought by the Philippines over the South China Sea, the foreign ministry said, as tensions mount over the disputed waters.

The United Nations-backed Permanent Court of Arbitration (PCA) said Wednesday it will rule on July 12 in a closely watched case challenging China's claims to much of the strategic waterway.

Beijing has consistently rejected the tribunal's right to hear the case and has taken no part in the proceedings, mounting a diplomatic and propaganda drive to try to undermine its authority.

"With regard to territorial issues and maritime delimitation disputes, China does not accept any means of third party dispute settlement or any solution imposed on China," foreign ministry spokesman Hong Lei said in a statement on its website.

The tribunal was "established on the basis of illegal conduct and claims of the Philippines" and "has no jurisdiction over the relevant matters," he said.

At a regular briefing on Thursday he added that by bringing the case to the arbitration court, the Philippines "disregards China's choice to resolving disputes in ways of its own choosing."

The Philippines insisted both it and China were required to follow the tribunal's ruling.

"Despite its non-appearance, China is and remains a party to the arbitration and is bound under international law by an award rendered by the tribunal," Manila's foreign ministry said in a statement.

"The Philippines believes that the rule of law prescribes a just and peaceful means of resolving differences, which is why the Philippines will fully respect the tribunal’s award."

Manila lodged the suit against Beijing in early 2013, saying that after 17 years of negotiations it had exhausted all political and diplomatic avenues to settle the dispute.

Spanning more than three years, two hearings and nearly 4,000 pages of evidence, the arbitration case in The Hague is extremely complex.

China claims most of the sea, even waters approaching neighboring countries, based on a vaguely defined "nine-dash" Chinese map dating back to the 1940s.

In recent years Beijing has rapidly built up reefs and outcrops into artificial islands with facilities capable of military use.

As well as the Philippines, several other littoral states have competing claims, and the dispute has also embroiled the United States, which has defense treaties with several allies in the region.

"I hereby once again emphasize that the Arbitral Tribunal has no jurisdiction over the case and the relevant subject matter, and that it should not have heard the case," Hong said in the statement, released late Wednesday.