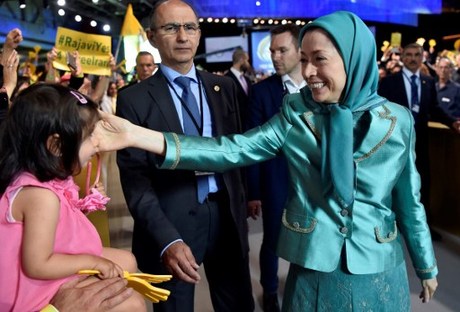 Iran on Tuesday condemned a rally in France by an exiled opposition group it labeled a "stinking corpse" and said it would denounce any country that backed it.

The National Council of Resistance in Iran (NCRI) claimed that 100,000 Iranians had attended its annual rally at Le Bourget, near Paris, on Saturday.

"The Islamic Republic of Iran will continue to confront this hypocritical little group and will condemn any government" that supports it, government spokesman Mohammad Bagher Nobakht told the official IRNA news agency.

He described the NCRI as an "annihilated terrorist group" and a "stinking corpse."

Zarif said: "A person who is the creator of both al-Qaida and the Taliban and has had a very disgraceful role in the history of the Saudi regime in the region" had attended the rally.

He did not mention Faisal by name.

The NCRI is a political umbrella coalition of five Iranian opposition groups that includes the People's Mujahedeen of Iran (MEK).

The MEK, formed in the 1960s to overthrow the shah of Iran, fought the rise of the mullahs in Tehran following the 1979 Islamic revolution.

The US State Department listed it as a "terrorist organization" in 1997.

It was removed from terrorist watchlists by the European Union in 2008 and the United States in 2012.