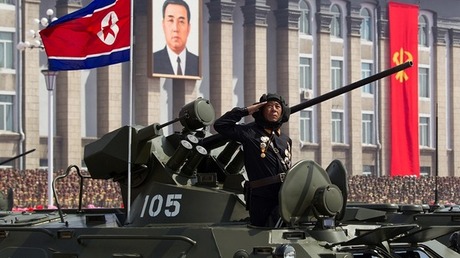 Tuesday's test firing of three missiles in violation of existing U.N. resolutions was seen as an angry reaction to the planned deployment of a U.S. missile defense system in the South.

The launch of the two Scud missiles and one intermediate-range Rodong was condemned by the United States, Japan and South Korea, who vowed a collective diplomatic response.

The tests were ordered and monitored by Kim Jong-Un and the range of the missiles was limited to simulate pre-emptive attacks on South Korean ports and airfields hosting U.S. military "hardware", the North's official KCNA news agency said.

The tests "examined the operational features of the detonating devices of nuclear warheads mounted on the ballistic rockets at the designated altitude over the target area," it said.

According to the South Korean military, the two Scuds flew between 500 and 600 kilometers (310-370 miles) into the Sea of Japan, while the Rodong was fired about an hour later.

A photo from the test, published on the front page of the North Korean ruling party's Rodong Sinmun newspaper, showed Kim sitting at a desk covered by a large map of the Korean peninsula.

The map was clearly marked with a possible missile flight path from the North to South's southern coast, around the major ports of Ulsan and Busan.

U.N. Secretary-General Ban Ki-moon on Tuesday said the tests were "deeply troubling" and undermined efforts to reduce tension on the Korean peninsula.

Pyongyang has repeatedly warned of pre-emptive nuclear strikes against the South and US targets there and elsewhere, although the main focus of its nuclear weapons program is to develop a credible strike threat against the U.S. mainland.

A series of missile tests this year aimed at backing up that threat led to the recent agreement between Seoul and Washington to deploy the sophisticated U.S. Terminal High Altitude Area Defense system, or THAAD, in South Korea.

Last week, Pyongyang responded to the announcement by threatening to take "physical action."

There are nearly 30,00 U.S. troops permanently stationed in South Korea.

The North test-fired a submarine-launched ballistic missile on July 9, following back-to-back tests of a powerful new medium-range missile on June 22.

Those two missiles achieved a significant increase in flight distance over previous failed launches and were believed to be of a much-hyped, intermediate-range "Musudan" -- theoretically capable of reaching U.S. bases as far away as Guam.

Since carrying out a fourth nuclear test in January, which prompted a significant tightening of U.N. sanctions, North Korea has claimed a series of technical breakthroughs for its weapons program.

It said it had miniaturized a nuclear warhead to fit on a missile and successfully tested an engine designed for an inter-continental ballistic missile that could reach the U.S. mainland.

While some experts say the claims are exaggerated, most acknowledge that the North's nuclear and ballistic missile programs have made significant strides.

In a separate dispatch on Wednesday, KCNA quoted a spokesman for the Korean People's Army (KPA) unit based in the border truce village of Panmunjom calling for all U.S. troops to leave the South immediately.

"The KPA already solemnly declared that the U.S. imperialist aggression forces in South Korea are its first strike target," the spokesman said.

"The U.S. should go back home, abandoning its wicked intention for a permanent stay in South Korea," he added.