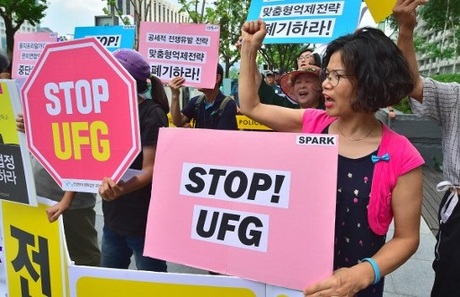 South Korea and the United States kicked off large-scale military exercises on Monday, triggering condemnation and threats of a pre-emptive nuclear strike from North Korea.

The two-week annual Ulchi Freedom drill, which plays out a full-scale invasion scenario by the nuclear-armed North, is largely computer-simulated but still involves around 50,000 Korean and 25,000 U.S. soldiers.

The exercise always triggers a spike in tensions on the divided Korean peninsula, and this year it coincides with particularly volatile cross-border relations following a series of high-profile defections.

Seoul and Washington insist the joint military drills are purely defensive in nature, but Pyongyang views them as willfully provocative.

The North Korean Foreign Ministry on Monday condemned Ulchi Freedom as an "unpardonable criminal act" that could bring the peninsula to "the brink of war."

The Korean People's Army (KPA), meanwhile, threatened a military response to what it described as a rehearsal for a surprise nuclear attack and invasion of the North.

The slightest violation of North Korea's territorial sovereignty would result in the source of the provocation being turned "into a heap of ashes through Korean-style pre-emptive nuclear strike," the spokesman said.

Pyongyang has made similar threats in the past, and actual retaliation to South Korea-US military drills has largely been restricted to firing ballistic missiles into the sea.

As the drill began, South Korean President Park Geun-Hye said a recent spate of headline-grabbing defections from North Korea signaled political turmoil in Pyongyang that could cause the leadership there to lash out against the South.

"It is increasingly possible that North Korea may undertake various terror attacks and provocations ... to block internal unrest, prevent further defections and create confusion in our society," Park told a meeting of her National Security Council.

Her comments came a day after the Unification Ministry in Seoul urged all citizens to be on guard against possible North Korean assassination attempts on defectors and anti-Pyongyang activists in the South.

Park said the South Korean military was on high alert and would "vigorously strike back" in the event of any hostile action.

Analysts say there is a genuine risk of an unintended incident escalating into a military clash, given the current absence of direct communication between the two Koreas.

As tensions rose in the wake of North Korea's fourth nuclear test in January, Pyongyang shut down the two existing hotlines with South Korea -- one used by the military and one for government-to-government communications.

And last month it severed its only direct communications link with the United States when it shut down the so-called "New York channel" which had previously served as a key point of contact between North Korean and U.S. diplomats at the United Nations.

Pyongyang has remained defiant, and there are concerns that the leadership will order a show of force in the wake of the recent defections.

Last week, North Korea's deputy ambassador to Britain, Thae Yong-Ho, defected to the South -- a rare and damaging loss of diplomatic face for Pyongyang and a major PR victory for Seoul.

The North's official KCNA news agency described Thae as "human scum" and said he had fled to avoid criminal charges including embezzling funds and raping a minor.

Thae's move added to Pyongyang's fury with the defection in April of a dozen North Korean overseas restaurant workers, who it insists were kidnapped by South Korean intelligence.