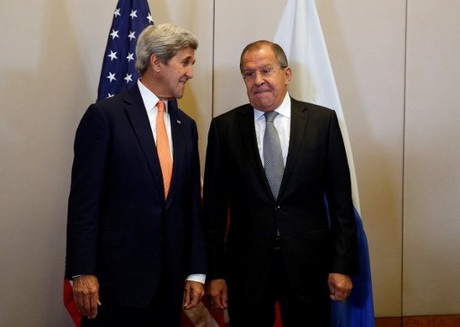 The United States and Russia will make a fresh bid to end the bloodshed in Syria Friday, as Moscow-backed regime forces make new advances against rebel fighters on the ground.

U.S. Secretary of State John Kerry flew into Geneva for crunch talks with his Russian counterpart Sergei Lavrov, with Washington warning talks could not go on forever without a breakthrough.

The two powers back opposite sides in the five-year conflict, with Moscow supporting the regime of President Bashar al-Assad and the US behind the rebels.

Senior Kerry officials said he would not have flown out to the high-level face-to-face talks with Lavrov unless he thought there was a chance of progress.

But they warned there was no guarantee of a final agreement within the narrow window available before both men return home later Friday.

- 'Back to square one' -Washington wants concrete steps from Russia to force its Syrian ally Assad to stop bombing his own people and to lift the siege of Aleppo.

"We need to see a situation where it's clear within whatever is being agreed with the Russians that there won't be a siege of Aleppo," a senior US official told reporters.

Pro-regime forces have taken back a strategically important district on Aleppo's southern outskirts, rolling back nearly every gain from a major month-long rebel offensive there, the Syrian Observatory for Human Rights said Thursday.

And in a further setback for the rebels, the top military commander of the Army of Conquest, the largest Syrian rebel alliance, was killed in an air strike during a meeting of the leaders of the anti-government group, Islamist sources said Thursday.

"Rebels are now back to square one, under an even more ruthless siege," Rami Abdel Rahman, head of the observatory, told AFP.

Shops in the east of Aleppo have been struggling since Sunday to secure goods and prices are skyrocketing.

- 'Reducing violence' -Ahead of the Geneva talks, the US pressed Russia for a "true cessation of hostilities" against a backdrop of continued military turmoil but warned that its patience is running thin.

US Defence Secretary Ash Carter told BBC radio on Thursday there was "quite a long way to go" before a final peace deal could be struck.

The Geneva talks "will focus on reducing violence, expanding humanitarian assistance for the Syrian people, and moving toward a political solution needed to end the civil war," State Department spokesman John Kirby said in a statement.

Lavrov has suggested that problems in another part of the world -- namely, US sanctions against Russia over the Ukraine crisis -- may be hampering efforts between the former Cold War rivals to resolve "regional conflicts," a reference to the Syrian war.

And Carter noted: "We have our differences, serious differences, with Russia elsewhere, especially here in Europe with Ukraine."

- IS chaos -While diplomats wrangled, fighting in the complex war continued to claim lives, with Turkish shelling over the border into Syria killing six Kurdish fighters aligned with US forces on Thursday.

The Syrian war -- which began as a pro-democracy revolt in 2011 but morphed into a multi-front conflict after the regime unleashed a crackdown -- has killed more than 290,000 people and forced more than half the population to flee their homes.

IS has used the chaos to spread throughout the country and into Iraq.

You mean as the Syrian Army advances.