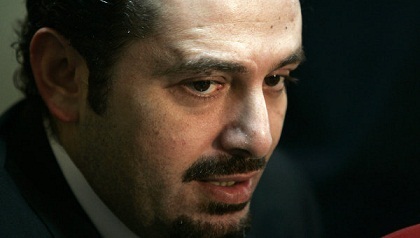 Al-Mustaqbal Movement chief ex-PM Saad Hariri described the Iranian political and media war against Saudi Arabia as “an episode in a dangerous series that only aims at exacerbating discord and threatening stability in the region.”

“After the irresponsible words of the Supreme Leader Ali Khamenei on the eve of Eid al-Adha, his foreign minister came out with a text full of hatred against Saudi Arabia,” said Hariri on Twitter.

“Zarif used an American media platform to incite the American administration and the American people against Saudi Arabia. The platforms of the “great Satan” are now considered suitable by the Iranian leadership to express satanic views,” he added.

“Iran is leading the widest operation to destroy the Arab societies starting from Lebanon to Syria, Iraq, Yemen and every country infiltrated by the Revolutionary Guards.”

“Iran is a direct partner in breeding terrorism and spreading it in the Islamic world, as can be seen in Afghanistan, Pakistan, Iraq and Syria. Those responsible for displacing the Syrian people, dividing Iraq, impairing Yemen’s unity and helping those accused of killing Rafik Hariri to escape, have no rights to point the finger at Saudi Arabia and its history of protecting moderation,” remarked Hariri.

The platforms of the “great Satan” are now considered suitable by the Iranian leadership to express satanic views,” Hariri added.

he's hilarious indeed. could hariri be any more saudi?

if you say so, psycho.

@mowaten
What can I say! Another E-X-C-E-L-L-E-N-T comment by you. I particularly appreciated the part where you said "that dude is not on the same planet as the rest of us iranians anymore."

Still laughing since January 2015. Thank you Thank you

I respect Mr. Mowaten, Mr. theresistance4.0 and all their aliases equally.

you are hilarious too! Could mowaten be any more iranian?

Which country are you a mowaten of ? Iran, Syria, Jabal Amil, Iraq or Yemen? Certainly not Lebanon oh no!

The Iranians are now publishing their views in the New York Times of the USA;)! A very Iranian friendly newspaper.

why do you support Iran and not Lebanon, is it because you are more shia than Lebanese?

who said he is Lebanese?

Is that a martyred iranian sectarian terrorist family in your avatar?

Who else comes to the rescue of their mother country Iran: the shia of Lebanon.

"Iran Choosing to support a sectarian proxy militia instead of the Lebanese Gov Armed forces" That is because the "Lebanese state" still takes orders from Zionist America. It abides by Israeli made laws to ban HA in banking and it refuses accepting REAL weapons from Iran.