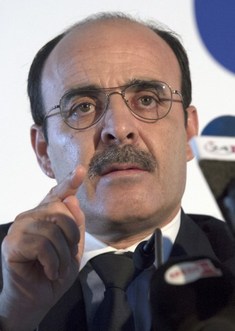 The head of Morocco's main secular party has vowed to combat "creeping conservatism" as it takes on the country's ruling Islamists in parliamentary elections next month.

In an interview with AFP ahead of the October 7 poll, Authenticity and Modernity Party (PAM) chief Ilyas El Omari warned of the dangers of growing reactionary thought in Morocco.

On the west coast of North Africa just south of Spain, Morocco has long been considered among the most liberal of nations in the Arab world.

But Omari said that since the Islamist Justice and Development Party (PJD) came to power in 2011, the country has changed.

"We are aiming to develop society by tackling creeping conservatism both within the state and outside," said the 49-year-old party leader, wearing an open-necked shirt and steel-rimmed glasses.

"What's happening in our society is scary... violent reactions against the modernization of social mores," he said.

The Islamist PJD led by Abdelilah Benkirane swept to victory in 2011 polls and has since headed a coalition that includes liberals, Communists and conservatives.

It denies any links or support for Islamic extremism and is campaigning on a record of guiding Morocco through the turbulence of the Arab Spring, economic woes and a constitutional overhaul.

Still, Omari said the PJD is "clinging to its ideological positions" and said his party is better placed to run the country.

Speaking to AFP at a hotel where he was launching the PAM's campaign, he said the party was placing women's rights and representation at the heart of its agenda.

He said his party aimed to get 30 women into parliament, which currently has 67 female MPs including 11 from the PAM and 20 from the PJD.

The PAM has presented two electoral lists entirely made up of women, along with six others headed by women -- a first in the Arab world, say party activists.

"We want to put our words into action. Everyone is talking about equality today, but we don't see progress. We need women in parliament," Omari said.

The PJD accuses Omari's party, founded in 2008 by Fouad Ali El Himma, an adviser to King Mohammed VI, of being too close to the royal palace -- an accusation Omari rejected.

"Most Moroccan parties were created by people close to the king -- including the PJD," he said.

"If someone has a problem with the monarchy, the king or his advisers, he should have the courage to say so."

Omari also flatly rejected any possibility of forming a coalition with the PJD.

The PAM sees itself as the defender of modern, democratic values, campaigning under the slogan "Change Now" and warning that another PJD-led government could spell "catastrophe."

Omari called on the Islamist party to clearly distance itself from militant views.

Benkirane, the prime minister, prompted an outcry earlier this year when he quoted Ibn Taymiyah, a militant 13-century theologian who inspires many of today's jihadists.

"We know who adopts Ibn Taymiyah's doctrine. That doctrine... calls for jihad and takfir (denouncing other Muslims as non-believers)," Omari said.

Omari launched his party's election campaign at a hotel in Casablanca that was the scene of a 2003 jihadist attack that left 45 dead.

"Innocents were killed here," he said. "The killers said 'yes to death, no to life'. We have chosen this place to declare the opposite: 'yes to life.'"