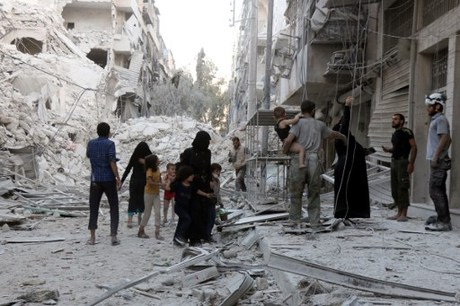 Convinced that negotiations with Washington are now futile, Russia has decided to throw its military might behind the Syrian regime's drive to recapture Aleppo, analysts say.

After a short-lived truce collapsed, Russian warplanes have joined Syrian aerial and artillery bombardment of the rebel-held east of the city, pounding it with unprecedented ferocity.

"Russia has decided to go all out because it no longer believes in the possibility of collaborating with the United States in Syria," said Fabrice Balanche, a Syria expert at the Washington Institute for Near East Policy.

"It's total war, because Moscow doesn't believe that this country (U.S.) is capable of doing anything in Syria, whether for lack of will or ability."

After intensive negotiations between U.S. Secretary of State John Kerry and his Russian counterpart Sergei Lavrov, a much-awaited ceasefire agreement went into effect in Syria on September 12.

But it fell apart within a week, with each side blaming the other for the latest failure in a conflict that has cost more than 300,000 lives since March 2011.

The deal called for the entry of humanitarian aid, particularly to besieged areas like opposition-held Aleppo, and for rebels to distance themselves from jihadists such as Fateh al-Sham Front, the former al-Qaida affiliate once known as al-Nusra Front.

Neither commitment was achieved, and the ceasefire has given way to some of the most intense violence in rebel-held Aleppo since it was divided by fighting in mid-2012.

By backing government forces in Aleppo, Moscow seeks "to close that important pocket of rebels' resistance at last", said Igor Sutyagin, a Russia expert at the Royal United Services Institute in London.

Outside Aleppo, only Idlib province remains a major opposition stronghold.

Russia intends "to give Assad a decisive victory" and to "eliminate any alternative, while depriving the opposition of what it considers its 'capital'," said Syria expert Thomas Pierret of the University of Edinburgh.

"An uprising chased from Aleppo will be relegated to nothing more than a peripheral insurrection," he added.

Russia has long been a steadfast ally of Damascus, entering the conflict militarily last September to bolster Assad against rebels backed by Gulf nations and much of the West.

It has also provided key diplomatic cover at the United Nations.

But Moscow now seems closer than ever to the regime, having decided after some hesitation to support the Assad government's desire to retake Aleppo by force.

"The Russians are now more in line with the Syrian government's way of thinking," said Bassam Abu Abdullah, director of the Damascus Center for Strategic Studies.

"Russia was focused on the political solution, so it began dialoguing with the Gulf and the U.S. and other countries, but it became clear that this is not possible," added Abdullah, who is close to the government.

A victory in Aleppo would put Assad's regime in a strong position ahead of any new negotiations, which U.N. peace envoy Staffan de Mistura has continued to seek despite the worsening conditions.

- An alliance of 'necessity' -

"Without Aleppo, Assad is nothing but a half-president. To really govern, he needs Aleppo," said Balanche.

Assad already controls most of the cities he considers key in Syria -- Damascus, central Hama and Homs -- with only Aleppo remaining.

"The Russians and the Syrians would like to take control of all of Aleppo and only afterwards negotiate with the opposition," said foreign policy analyst Fyodor Lukyanov.

"Aleppo plays a key role" because the future "depends on the state of the front line that separates the fighting parties. And that line must be stable."

The new assault has been devastating, with more than 150 people killed in the city since the army announced its offensive there late Thursday.

The heavy bombing has raised some comparisons with Moscow's strategy against Chechen separatists in the 1990s, which saw the capital Grozny nearly completely destroyed by air power and artillery.

But analysts said the devastation was not yet on a similar scale.

"Russia's military tactics in Aleppo are nothing like those used in Grozny," said Alexandre Golts, an independent military expert.

"In Aleppo, the civilian deaths are in the dozens, if you believe the Western media, not hundreds like in Chechnya. It isn't comparable."

Russia's ramped-up military involvement in Syria has drawn stinging criticism from the United States and others, but analysts say Moscow's alliance with Damascus is firm and founded on key shared interest.

"Assad can't do anything without Moscow, and Russia in turn knows that without Assad it will be chased from the Middle East," said Alexei Malachenko, a Russian Middle East specialist.

"It's a friendship of necessity."

I hope readers recognized the name, Washington Institute for Near East Policy, as a lobbyist group for Israel. It is indicative of the ferment within the international organization of Israel that its former policy on Assad, which was that he prevented Syria from becoming more of a threat to Israel, seems to be under review.

Israel must be concerned with its Gulf monarch partners, who drive the insurgency in Syria and Iraq and enable the military junta in Egypt, that their extremism not get out of control and become directed at Israel. In turn, the former colonial powers, is any state ever a "former colonial power" or does the imperialist germ live on and on?, are watching the delicate balance these monarchies are holding, especially in the case of Lebanon. Naharnet likes the term "balance", but it looks to me like paralysis, and as Balanche says, sometimes a state doesn't act simply because it is either unable or unwilling to. His terms suggest cowardice, being afraid to face the problem. Of course, Israel's entire modern history, and Lebanon's with it, are based on the spurious wisdom of not facing problems. As Ira Sharkansky would often say, "Israel muddles through." Perhaps those days are over.