A Year of Bombing in Syria Stirs Little Debate in Russia 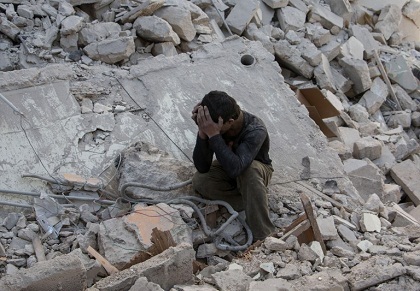 Veteran Russian opposition activist Sergei Davidis was among 300 people who showed up to a protest in Moscow against the start of the Kremlin's Syria bombing campaign.

But that was pretty much the last demonstration.

"As far as I know there haven't been any other events dedicated specifically to the Syria issue and the involvement of Russian forces in the conflict," Davidis told AFP.

This week marks one year since President Vladimir Putin launched air strikes in support of long-time ally Bashar Assad, thrusting the country into the heart of a complex war that has now claimed some 300,000 lives.

The intervention -- the Kremlin's first beyond the borders of the ex-USSR since the start of the disastrous decade-long Afghanistan campaign in 1979 -- shored up Assad's flagging regime forces and shook the West.

But, while ongoing strikes by Russian jets stir furious condemnation abroad, back home in an environment tightly controlled by the Kremlin, Moscow's involvement generates only limited interest -- and even less debate.

"A faraway war that according to the popular understanding doesn't cost too much and doesn't bring us too much harm -- it has ended up on the periphery of the public consciousness," Davidis said.

After a dramatic few years, Russia is mired in an economic crisis and a standoff with the West over Ukraine, he pointed out, and even the country's marginalized opposition is not that interested in Syria.

"Society here has more important concerns to discuss," he said.

As ever the main driver of public opinion has been the slavishly pro-Kremlin state media -- and its version of what is happening in Syria.

From the start of the conflict in 2011, Russia helped deflect criticism from Assad's regime over its brutal crushing of protests and killing of civilians. It sent arms but shied away from direct involvement.

When Putin launched the strikes -- taking both Russians and the West by surprise -- he insisted Moscow was joining forces with Damascus to support Syria's legitimate leader and battle a terrorist threat that could one day threaten his own country.

"At first people's reaction a year ago was some kind of bewilderment and even fear," said Lev Gudkov, the head of the independent Levada Center pollsters.

"But then as the state propaganda got going they began to be convinced."

Now, as U.S. Secretary of State John Kerry has accused his Russian counterpart Sergei Lavrov of being in a "parallel universe" on Syria, what Russians are being told is almost the mirror image of what Western media shows.

For the past week, media outlets around the world have carried horrific images of civilian casualties from the ferocious bombing of Aleppo and allegations of possible Russian war crimes.

But on the nightly news on Russian state channels, while they still lead with the conflict, reporters embedded with Assad's forces around Aleppo focus on alleged "terrorist" attacks on civilians and Syrian de-mining efforts.

Little mention is made of any involvement by Moscow's warplanes and Western criticism is painted as part of a campaign that began with the crisis in Ukraine and is aimed at curbing Moscow's resurgence as a world power.

"Any negative news about what Russia is doing is always framed in the context of this information war and as anti-Russian propaganda," sociologist Gudkov said.

So far, observers say, Russians feel that the military campaign in Syria has not cost them too dearly.

Moscow has managed to stamp its mark on the conflict with a few dozen planes and several thousand servicemen.

While advisers and special forces are deployed, the Kremlin still insists Russian troops are not fighting on the frontline and officially only some 21 Russians have been killed in combat so far.

In a park on the eastern edge of Moscow, mothers pushed prams past a rare monument to some of the 15,000 Soviet soldiers who died in the Afghanistan campaign.

Sitting on a nearby bench, former aviation plant worker Irina lowered her newspaper as she thought about Moscow's latest conflict.

"Syria -- no, people don't really discuss it very much," she said, refusing to give her surname.

"The television doesn't really show much about the operation itself nowadays -- it's mainly about how we're delivering humanitarian aid."

Despite Putin in March announcing a partial withdrawal of Russian forces in Syria -- Moscow's jets have continued to bomb just as before.

Now, as the country marks one year of its latest intervention, there is no sign of the operation ending any time soon.

A poll released Wednesday by state-run VTSIOM showed the number of people who thought the situation was improving in Syria fell from 48 percent to 27 percent between March and July this year.

But, peering over at the memorial to those who died during the almost 10 years of fighting in Afghanistan, pensioner Irina said she was sure history would not repeat itself.

"I think there are major differences between our involvement in Syria and Afghanistan," she said.

"It is not on the same scale."