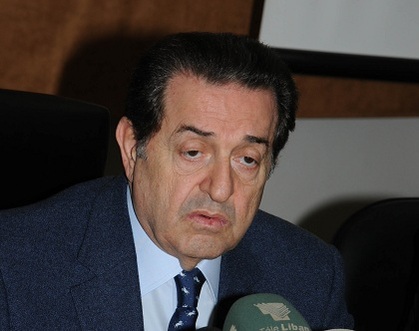 Telecommunications Minister Butros Harb said on Saturday that it is not in al-Mustaqbal Movement ex-PM Saad Hariri's interest to nominate MP Michel Aoun for the presidency, as he pointed out that it would lead the country to “negativity.”

“The country will arrive at a lot of negativity shall Aoun (founder of the Free Patriotic Movement) become a president,” said Harb to the VDL (100.5) in an interview.

“Although Hariri has not nominated Aoun yet, but I can see that he is apt to support his candidacy,” added Harab.

“It is not in Hariri's interest,” he went on to say.

Highlighting the interference of Hizbullah, Aoun's ally, in the war in Syria Harb asked: “We still don't know the position of Aoun as for the involvement of Hizbullah in Syria?”

Hariri held a much-anticipated meeting with Aoun in Rabieh on Friday, shortly after he held talks in Maarab with Lebanese Forces leader Samir Geagea.

The ex-PM's return to Lebanon last week has triggered a flurry of rumors and media reports about a possible presidential settlement and the possibility that the he has finally decided to endorse Aoun for the presidency in a bid to break the deadlock.

Hariri's move prompted Geagea to endorse the nomination of Aoun, his long-time Christian rival, after months of political rapprochement talks between their two parties.

Caporal is an agent. A corrupt 3ameel. Even though Ebola does not trust him. Why? Because he is mentally disequilibrated.

Actually Aoun is the only one Hezbollah see fit for President post.

Aoun President...pfff... I am glad I left Lebanon!