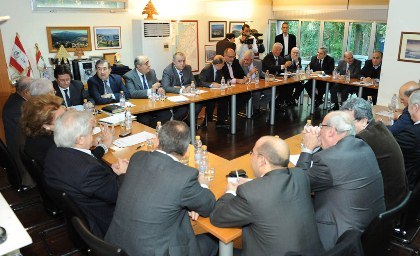 Labor Minister Charbel Nahhas did not confirm Wednesday whether Change and Reform bloc ministers would attend a cabinet session set to discuss the funding of the Special Tribunal for Lebanon.

“There is a possibility that the bloc’s ministers would attend the cabinet sessions,” Nahhas told Voice of Lebanon radio station (93.3).

He said the boycott of the ministers of the government session last Friday was a strong message sent to Prime Minister Najib Miqati. “It had positive results.”

Putting the wage article on the cabinet agenda is a positive development, he added.

Several decrees linked to Nahhas’ proposal on the wage boost were put on the 69-item agenda of Wednesday’s session.

Culture Minister Gaby Layyoun, another member of the bloc, told VDL (100.5) that his party is adopting a wait-and-see approach on whether its reform demands will be met.

The bloc’s ministers have linked their participation in the cabinet to a set of conditions. The government’s discussion of the salary boost and the implementation of several development projects were among the demands made by the ministers loyal to Free Patriotic Movement leader Michel Aoun.

Aoun on Tuesday showed leniency in finding a solution to the STL funding crisis.

Asked whether his bloc was ready to cooperate with efforts to resolve the issue, he said the Change and Reform is open to any solution provided that it maintains stability in Lebanon.

Informed sources told As Safir newspaper that the MP’s remarks were a sign that the crisis was being resolved.

But FPM leadership sources said that despite the positive attitude towards their demands, the move to put Nahhas’ proposal on the wage boost was not enough for the Change and Reform bloc ministers to attend cabinet sessions.

The ministers will only return to the government if they receive promises that their requests will be met, the sources told As Safir.

Despite the reports about the possible boycott of the FPM ministers of Wednesday’s session, it was not yet clear if the meeting would be postponed or not.

During their talks at Baabda palace, Suleiman promised Bassil to discuss the issue with Miqati, it said.