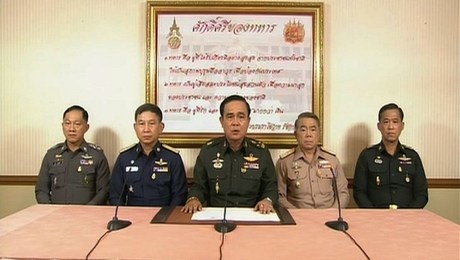 During his seven-decade reign, King Bhumibol Adulyadej forged deep ties with Thailand's military, which is expected to remain a key power broker as the monarch's son tries to emerge from his late father's lengthy shadow.

In a country battered by near-constant power struggles, Thailand's military establishment has long tied its political fortunes to Bhumibol, who died on Thursday aged 88.

The armed forces portray themselves as the ultimate defender of the monarchy and most of the many coups launched during Bhumibol's reign were done in the name of protecting the king -- and eventually endorsed by him.

But the king also wielded enormous prestige, famously calling Thailand's then military ruler to his palace in 1992, humiliating him on television for ordering a bloody crackdown on demonstrations against his government.

"There's no light at the end of tunnel in terms of demilitarization any time soon," said Paul Chambers, an expert on the Thai military and monarchy.

The current military junta that seized power two years ago said it did so to halt years of violent political factional fighting.

But with the king already ailing at the time, many saw the putsch -- the latest to halt Thai democracy in its tracks -- as the generals ensuring they were in control during the coming royal succession.

The junta led by army general Prayut Chan-O-Cha has promised elections by late next year.

But Thitinan Pongsudhirak, a political science professor at Thammasat University, said Prayut and senior officers will wield huge influence over what happens.

"The military junta and high command will play an indispensable and instrumental role during this delicate transitional period," he said.

Thailand's monarchy is shielded from criticism or scrutiny by a draconian lese majeste law and prosecutions since the 2014 coup have surged.

Prayut has been the most visible official since the king's death was announced Thursday, delivering key televised statements and vowing to keep the country stable.

He, rather than the crown prince, made the surprise announcement to reporters late Thursday that Vajiralongkorn wants more time to mourn his father and prepare before being officially proclaimed king.

But the junta leader is not the only senior military figure who wields political influence.

Under Thailand's succession law, he would be acting regent in the event of any succession crisis.

In the run up to Bhumibol's death there was intense speculation inside Thailand over rivalries within the military elite, particularly between the junta and Privy Council.

Prayut and his comrades are often dubbed the "Eastern Tigers", a military clique that rose up through the Queen's Guard and became increasingly influential over the last ten years.

Prem's faction, meanwhile, hailed from the King's Guards. They are seen to have lost influence since the rise of the Eastern Tigers.

While Bhumibol worked closely with the military, "there’s always been a much more independent streak within the crown prince" said one analyst who asked not to be named because of the sensitivities.

"That independence really concerns the Bangkok elite and the military that supports them," the analyst said.

Vajiralongkorn is a former air force fighter pilot who also spent time in the King's Guard during the 1970s.

He has his own personal guard -- the Royal Guard 904 -- which Chambers estimates is some 5,000 people strong.

But he has often spent much time outside the country. His military network is less deep-rooted and the extent of his power base unclear.

"(Bhumibol) had a tendency to keep people for a long time in high positions and they would return the necessary adulation and support to safeguard the palace. It was a very reciprocal relationship," he added.

Thitinan described Bhumibol's links with the military as a "symbiotic relationship" that saw the two institutions through the Cold War and into the modern era.

"But this relationship is unique to the late King because he earned it," he said.